One thing I love about living in Switzerland is that the four seasons are very defined; summer is hot, winter is very cold, and then there is the much awaited spring after the cold and foggy winter, and the much cooler autumn after the hot summer. When I was younger I lived the seasons so mindfully and loved every aspect of them but with two small children, life is often too busy and chaotic to actually see how nature is changing. This is why I decided to create a must-do-list for each season, to bring back some much needed mindfulness into our lives and enjoy nature and food according to the seasons. First up, autumn!

One. Visit an autumn fair. In the autumn months, a plethora of funfairs, wine festivals and other food related fairs are taking place all across Switzerland, which always puts me straight into autumn mode. Make sure you eat some typical Swiss fair fare like Öpfelchüechli (apple fritters with vanilla custard), Magenbrot (spiced cookies), gebrannte Mandeln (sugar coated and roasted almonds), Knoblibrot (garlic bread).

Two. Have a campfire lunch in the woods. Summer campfire meals are great as the trees provide a much needed respite from the scoarching sun, but autumn ones are equally lovely – the sun isn’t as hot anymore and the fire warms up both air and soul. Pack some sausages (Cervelat, Bratwurst or similar), some crisps, drinks, boiled potatoes in aluminium foil, bread or pasta salad and head to the woods and enjoy your lunch while being surrounded by the wonderful red and yellow trees. It’s mushrooms season too, so go for a walk through the woods and spot the wonderful array of mushrooms.

Four. Look out for the autumn drinks. Sauser (young wine) and Süessmoscht (apple juice) are most delicious when enjoyed unpasteurised. Not pasteurising, however, means that the drinks have to be consumed within a few short weeks; this makes them the ultimate autumn treats. If you haven’t heard of Sauser; this is wine that is being bottled shortly after the fermentation process had started. It’s bubbly and only slightly alcoholic. There are pasteurised versions too but the pasteurisation takes a lot of the deliciousness away, so I’d always go for the unpasteurised ones that are only available for a very limited amount of time. You can find Sauser bottles at the market and in supermarkets, however the prices from market to supermarket vary significantly.

Five. Indulge in fresh nuts. Nuts are at their most delicious when eaten just after harvesting. You can find freshly picked walnuts at the farmers markets and you can head to your local parks or woods to pick your own beechnuts (look for the ones lying on the ground around the beech trees). It’s said that eating too many raw beechnuts can lead to tummy issues but we’ve never had any issues, we just limit our intake to 10-20 nuts per day.

Six. Spot autumn produce at the farmers market. Visiting the farmers market regularly is lovely throughout the year, but it’s especially appealing from late summer to the beginning of winter. If you go there regularly during that time, you can see how the produce is changing slowly from summer to autumn to winter produce. Ideas for autumn produce from the markets: Seasonal apple varieties such as Gravensteiner, Boskoop or Cox Orange which aren’t available in the supermarkets throughout the year. Parsnips (if you don’t like them in your soups and stews, try this delicious parsnip, mascarpone and maple syrup cake). Beetroot; eat them raw or cooked in mixed salads or add them raw to smoothies with apples or oranges. Savoy cabbage calls for comforting stews and soups. Quinces make delicious jelly we Swiss eat on a buttered slice of bread.

Seven. Make the most of chestnuts. Most chestnut trees you can find in Switzerland are of the inedible horse chestnut variety. Children love collecting them, but unfortunately they can’t be used for more than crafting. You can buy edible chestnuts from Italy in any supermarket or market and roast them at home, either in a frying pan or in your oven. Or of course, head to the local marroni stall in your town and buy a bag  of freshly roasted chestnuts and enjoy them while they’re hot. But there’s a lot more to chestnuts than eating them freshly roasted. A typical Swiss autumn dish is caramelised chestnuts with red cabbage, mostly eaten together with homemade Spätzli pasta and some saucy meat such as Voressen. The rather sweet, chestnut-based dessert called Vermicelles is enjoyed by many. You can either buy the dessert ready-made in bakeries or supermarkets or make your own with chestnut paste from the supermarket (to be found both as blocks in the freezer or as a tube).

Eight. One for the carnivores. If you’re a meat lover, autumn has some special treats for you. It’s both the game season (both in restaurants and the shops) and it’s also the time for the Metzgete, a feast at which the meat from freshly slaughtered animals is eaten. The Metzgete is typical for Switzerland and the border area of southwestern Germany. Dishes you would typically encouter at a Metzgete are Blutwurst (sausage made of blood), Leberwurst (sausage made of liver), Speck (bacon), Rippli (cured pork chop), liver and the likes. Side dishes include Sauerkraut, green beans, boiled potatoes or Rösti. The Metzgete shouldn’t be confused with the Züri Metzgete (Zurich Metzgete), which has nothing to do with meat whatsoever – it’s an annual bike road race on the outskirts of Zurich.

Nine. Bring autumn into your house. An important part of the Scandinavian Hygge is to bring nature into your home to improve your mood and wellbeing. The woods and parks are full of little treasures in autumn – branches, leaves, sticks, nuts, empty beechnut shells, horse chestnuts – bring some of them home and enjoy autumn at home too. 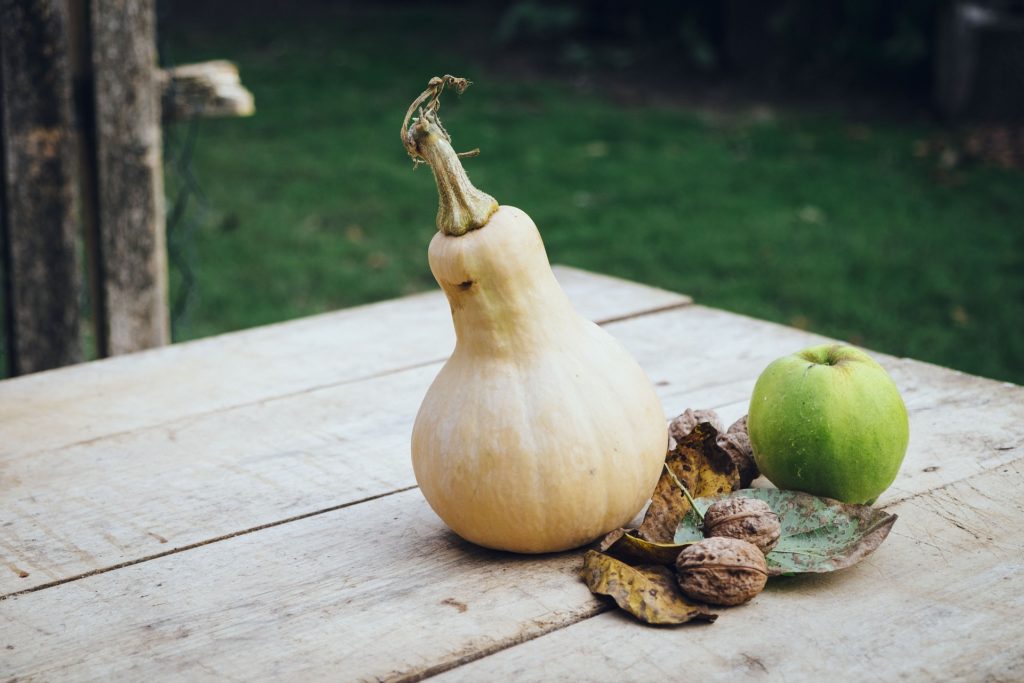