Once the temperatures get colder, the expression jetzt isch wieder Suppeziit pops up everywhere. 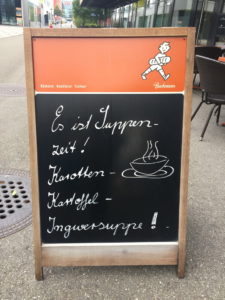 Suppeziit means soup time, and the expression means the colder months and the time for soups is here again. Probably like every other country, the Swiss love their soups. We mainly eat them during the cold months; there’s nothing more comforting than tucking into a hot bowl of delicious soup when it’s cold and dark outside. With so many regions and languages, there are of course dozens of traditional soups. My soup list concentrates on the German part of Switzerland – here they are! 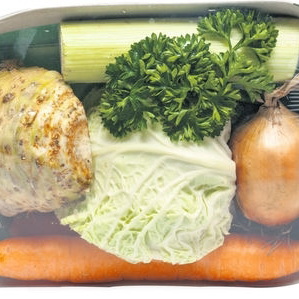 Sometime in autumn the supermarkets start selling handy little packets of raw soup vegetables. Normally these packets contain a carrot, a potato, a white onion, half a leek, a quarter or half of a knob celery and the same amount of white cabbage. This vegetable soup is very common, in my family we’ve always been eating it with homemade bread croutons. My soup and croutons recipe is here. 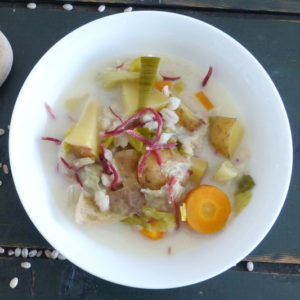 One of the most famous Swiss soups comes from the alpine canton of Graubünden. The Bündner Gerstensuppe, a barley soup, is wonderfully rich and filling, containing barley, various vegetables and dried meat. It’s just what you need on a cold, wintery evening, ideally accompanied by a freshly baked slice of Swiss bread. This soup is also a popular dish in the restaurants on the Swiss ski slopes. Or you can easily cook it yourself, here’s our recipe. 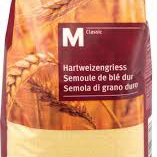 Cooking with Hartweizengriess (semolina) is a common thing in Switzerland, the dishes range from desserts to cakes. There’s also the Griessuppe (semolina soup), a quick soup made with semolina. There are lots of recipes out there for this soup. I cook it like the same way like the Hafersuppe (oatmeal soup) just below, but with semolina instead of oatmeal. Recipe with exact measurement following soon. 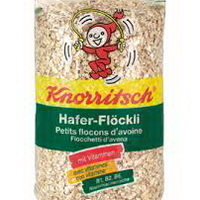 Another quick, comforting soup is the Hafersuppe, or oatmeal soup. It’s basically a salty porridge made with stock, onions and some vegetables. Quick recipe: In a saucepan, fry some chopped onions in vegetable oil or butter. Add a some tablespoons of oats and toast them until they smell slightly toasted. Add chicken, beef or vegetable stock, some salt and pepper and if you like some chopped vegetables such as leek or carrots. Cook until the oats and vegetables are soft. Add chopped parsley and serve with a slice of freshly baked bread. Recipe with exact measurements following soon.

Another Swiss classic, not only in Basel, is the Basler Mehlsuppe (flour soup from Basel). The soup consists of a lot more than just flour and is very tasty. It originates from the Basler Fasnacht, the Basel carnival which marks the start of Lent. The Basel carnival starts with the Morgenstraich, the early morning parade that starts at 4 o’clock one Monday morning early in the year. The city lights turn off and the colourful parade with large, illuminated lanterns fills the city with its very special magic. The Mehlsuppe is typically eaten after the parade in the morning. Here’s a recipe for Basler Mehlsuppe. 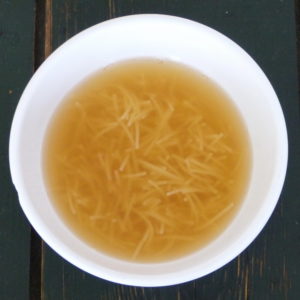 Fideli are a variety of noodles, thinner than spaghetti and very short (also known as egg vermicelli). The Fidelisuppe – a broth containing this kind of noodles – is a Swiss classic, something every child loves and people sometimes also eat when they have a weak stomach. How to cook Fidelisuppe: heat up chicken, beef or vegetable stock and add the noodles. Cook until tender (3-4 minutes). My children also love the Fideli noodles on their own with a splash of Maggi seasoning.

The Flädlisuppe is a crepes (pancakes) soup – sliced crepes in chicken or beef stock and some chopped parsley on top. Whenever I make savoury crepes for dinner, I make sure to make some additional ones for a Flädlisuppe the next day. While Flädlisuppe is a very typical Swiss dish, it didn’t originate here. It probably originated in France and is enjoyed in its home country, Germany, Austria, Italy and Hungary. Directions: heat up beef or chicken stock. Add sliced crepes and chopped parsley or chives and serve immediately.

Vegetable cream soups are very common too, both freshly made and as dried, ready-made soups. Populare ones are: Spargelcremesuppe (aspargus creme soup), Broccolicremesuppe (broccoli cream soup), Pilzcremesuppe (mushroom cream soup). A basic recipe for all these soups is this: Chop 1/2 an onion and gently fry it in some oil. Wash and cut 300g of vegetables, add them to the onion and cook the mixture in 5dl of vegetable, chicken or beef stock for 15 minutes. Using a blender, purree the mixture. Put it back into the pan and add 2 tbsps of crème fraiche or 1dl of cream. Season with salt and pepper. 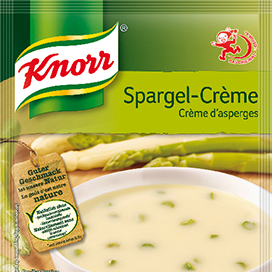 Unlike the UK and other countries, tinned soups aren’t a big thing in Switzerland. We do, however, love our dried soups which are prepared with just water and ready in minutes. The most famous ones are the Knorr soups, but others do decent ones too. My favourite one is the Spargelcrèmesuppe (aspargus cream soup). These days more and more fresh soups in the chilled section of the supermarkets are popping up, and also ready-made soups in bags. I still do like these dried packets though, they’re slim and great for a backup in the cupboard.

2 Replies to “9 Traditional Swiss Soups To Try This Autumn”