If you’re visiting a Chilbi (funfair) in Switzerland, the Öpfelchüechli stall is a must to look out for. There’s nothing more comforting than a portion of warm, freshly deep-fried apple fritters coated in cinnamon sugar, ideally accompanied by warm, runny vanilla custard (Vanillesauce). It reminds me of the cold autumn and winter days at my local funfairs in Thurgau as a child. Having a penchant for sweet dinners, we Swiss also like to eat apple fritters with vanilla sauce for dinner. 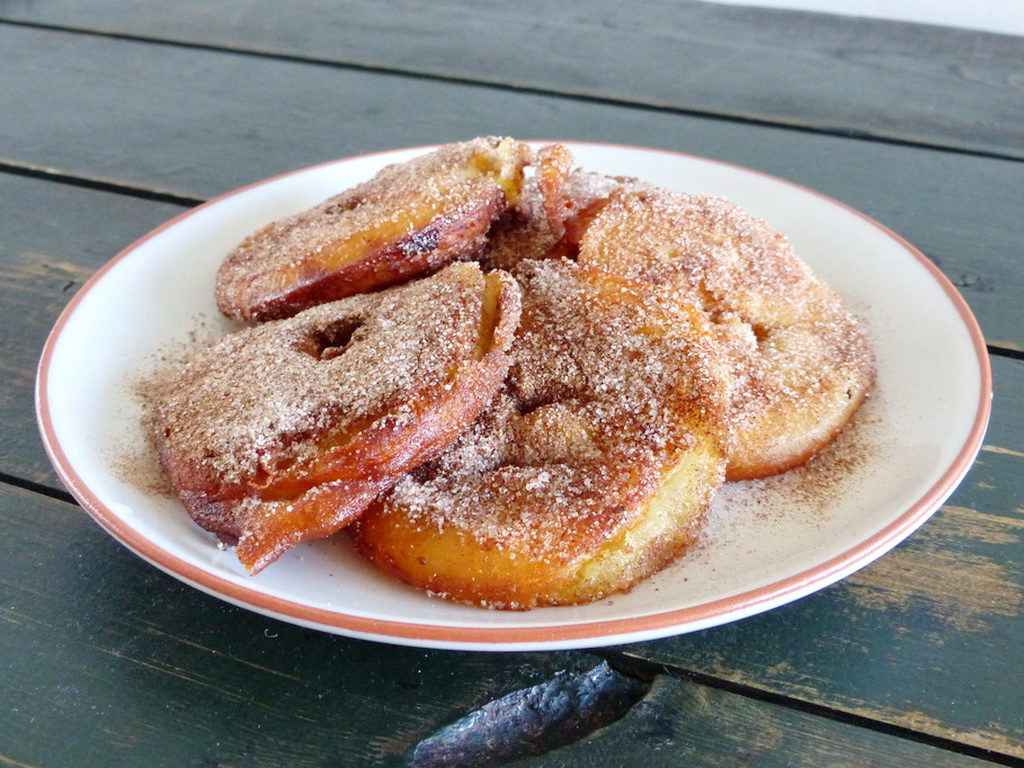 In a separate bowl, mix the flour, salt and baking powder. Add the apple juice and mix until you have a smooth dough. Add the egg yolks and 1 tsp of vegetable oil, mix and let the dough rest for 30 minutes.

Peel the apples and remove the core. Then cut the apples into rings of 1cm thickness. Marinate them with the lemon juice and 2 tbsps of sugar.

Once you’re ready for frying, whisk the egg whites until stiff. Carefully fold them into the dough.

Heat the oil in a deep fat fryer or a deep pan to 180 degrees (or medium-ish hot if you don’t have a thermometer; medium hot results in the coating turning into a nice brown colour but slow enough so the apple inside gets cooked too.

Once the oil is hot, take an apple ring with a fork and pull it through the dough, shaking off the excess dough and fry in the oil until brown. This should take about 3-4 minutes, then flip it over to fry the other side too.

Once finished, place on kitchen paper to get rid of the excess oil. In a bowl, mix the cinnamon and sugar and coat the apple fritters with it and serve immediately while still warm, with vanilla sauce.