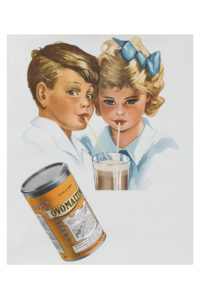 ‘Mit Ovomaltine chasches nöd besser, aber länger’ (lit. ‘With Ovomaltine you can’t do it better, but longer’) is a tagline every Swiss is familiar with. It is, in fact, the most famous of all product taglines in Switzerland acording to the Swiss market research study of the year 2014. Another famous one is ‘Häsch Dini Ovi hüt scho gha?’ (lit. ‘Have you had your cup of Ovomaltine yet today?’). Most Swiss people of my generation grew up with a daily mug of chocolate flavoured milk. However, there were different camps. I belonged to the Ovomaltine camp, my husband’s family was in the Nesquick camp, and there was also the Suchard Express and the Caotina drinkers. The difference between the other chocolate milk drinks and Ovomaltine is that the latter is the only one that contains malt and added vitamins (as does Jemalt, the other Swiss malt drink). Ovomaltine was always marketed as the healthier alternative to the other chocolate drinks, because it’s not containing any processed sugars (Swiss version only) and has an array of added vitamins and trace minerals. While Ovomaltine does contain some healthy elements, it’s still quite sugary.

In people’s minds Ovomaltine has been linked to Switzerland ever since its beginning. It was, therefore, with a heavy heart when Ovomaltine’s producer Wander was sold to the British company Associated British Foods in 2002. The malt drink’s roots are in Berne, Switzerland, where Georg Wander opened a ‘chemical-technical and analytical laboratory’ in the year 1865; not quite a name that conjures up images of delious chocolate drinks. In 1904 the production of Ovomaltine was taken up in Wander’s laboratory. The first international sale warehouses opened in Italy and England only two years later. In 1927, production was moved from Berne to Neuenegg, a town near Berne. Since 2002 the entire European production has been carried out at that factory (the overseas production sites are in China, Thailand and Australia). The Ovaltine for the US market is produced in the US by Nestlé, not by Associated British Foods). 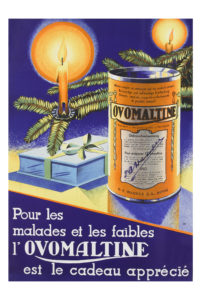 Ovomaltine tastes quite different in different countries, and I’ve never encountered the Swiss version anywhere else. The name Ovomaltine stems from the Latin word ovum for egg and malt, as these used to be two of the main ingredients. Nowadays Ovomaltine doesn’t contain any egg anymore to make it accessible for people allergic to eggs. In most countries outside of Switzerland, Ovomaltine is known as Ovaltine. The reason for this isn’t entirely clear. Because I couldn’t find any answers on the internet, I spoke to Ovomaltine’s producer Wander but even they aren’t sure which of the two existing theories is true. One is that Ovomaltine was spelled incorrectly as Ovaltine when the trademark was registered in Britain in the early 1900s and the name was kept as that. The other one is that the change to the name Ovaltine was a deliberate act for the overseas market to make spelling easier for non-German speakers.

When I was a child in the 1980ies, there were four Ovomaltine products: the powdered Ovomaltine for the milk, Ovo Sport (bars made with pressed Ovomaltine), Choc Ovo (chocolate covered Ovomaltine bars) and the Ovomaltine chocolate bars. For me personally, all four of these are to die for. While the Choc Ovo bars were more of a dessert, my mum always gave me one or two Ovo Sport bars for my school hiking trips and sport days, since they’re an excellent source of energy for tired legs. I’m also quite happy to eat the Ovomaltine powder straight out of the box, after all it’s exactly the same ingredient as the Ovo Sport bars. These days, there’s an impressive array of Ovomaltine products from bread spreads to ice creams and bisquits. While I like them, for me personally the four products that were around when I was small are still their top ones.

6 Replies to “Ovomaltine, a tin of Swiss history”