It’s summer and the vegetable season is in full swing. April was mostly early produce such as carrots, beetroot, last year’s potatoes, radish and Swiss chard. While we got told May would bring lots of exciting spring produce, this rather small range of varieties continued until early June and eventually the weekly batches became quite small. The two professional gardeners of the 240 members strong cooperative are doing an amazing job of planning the vegetable year so a satisfying amount of produce is ready for every member each Friday, but even the most experienced gardener is helpless against the power of nature. A very dry early spring was followed by an exceptionally wet late spring, which meant that once the sun came out in June, first nothing was ready to harvest and then all of a sudden everything needed to be picked. So at the moment we get an exceptionally large amount of vegetables and the promised big batch of green beens wasn’t even part of it this week due to the sheer amount of other vegetables the scheduled harvesting members had to harvest on Friday morning. It was quite a task to pack up all vegies in the depot last night and I think this batch will last us easily for the entire week for the four of us, considering I only have a vegie subscription for one person. So this week, there was: carrots, lettuce, red cabbage, round courgette, yellow courgette, two cucumbers, gherkins (need to be preserved), potatoes, tomatoes, parsley, spring onions, white radishes. 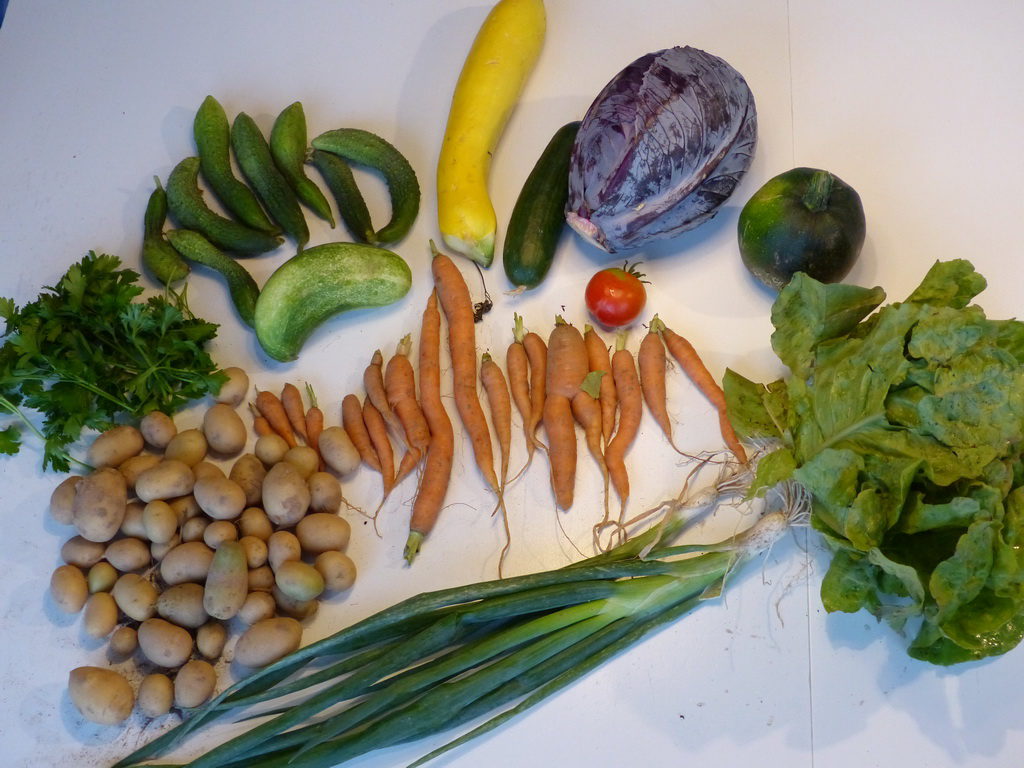 We also started to deliver some of the 20 hours of yearly gardening work that are required from each member. One time I chopped hours of vegetables for the cooperative vegetable wok stall at a neighbourhood festival. Two Saturday mornings I took my husband and kids to the fields where we worked according to the instructions of the gardeners. Monday to Friday, the work slots are pre-defined both in terms of time slots and tasks, while on Saturdays members can just show up and work as long as they want, doing all the jobs that couldn’t get finished during the week. We did a fair bit of weeding, preparing fields for new seeds, picking potato bugs from the potato plants, and the best bit of it all, harvesting about 15 boxes of potatoes. For my husband and kids it was the first potato harvest but for me it brought back fond memories of me and my friends collecting bags of potatoes that were left behind by the farmer on the potato field on the way from primary school.

While my family can easily get through the large amounts of vegetables we currently receive each week, the cooperative members who live in a smaller household are doing what humanity had been doing for thousands of years before global trade and fridges/freezers; preserving the produce for winter when the harvests are much smaller and less varied.

2 Replies to “The Veg Cooperative: The Summer Harvest”