Swiss German isn’t an easy language to learn for any foreigner. Not only is the grammar and the word order often different to (High) German, but also there’s no written language, hence no dictionary with one Swiss German expression for each German word. This makes Swiss German even difficult for us natives – with my Thurgau/Zurich origin, I can mostly understand a person from Bern in a spoken conversation but struggle immensely when I’m asked to read a letter by the same person if they write in Bernese dialect. If I go a bit further away to the canton of Valais, I can hardly understand anything in a spoken conversation, let alone in writing. While the existence of so many different words for one object is confusing, it’s also highly fascinating. There’s a great book called Kleiner Sprachatlas der deutschen Schweiz, a collaboration mainly by the universities of Zurich and Fribourg, that discusses exactly this topic. On more than 120 geopraphical maps, the Swiss dialect expressions for one and the same thing are presented. For example the word ‘ant’; what in my family was always called Ameise, just like the Germans call it, has a mind-boggling variation of names in Switzerland’s regions where Swiss German is spoken. For example: Wurmbaasle, Emess, Uuwaise, Hambitzgi, Umbeissgi, Wurmöisli, Oumaisse, Äbes, Immesse, Amassle, Bääramsle. Who knew! 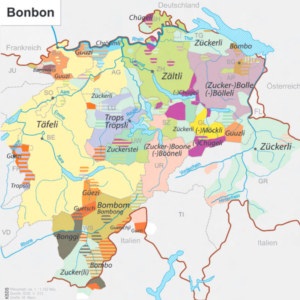 So, if you like languages, this might be a book well worth investing in – even if you don’t speak Swiss German well. As you know by now, even natives like me don’t understand most of what’s written in there so there’s a good chance you’ll be able to impress your Swiss friends with your newly acquired knowledge.