The Bündner Gerstensuppe, a barley soup from the alpine Canton of Graubuenden, is hugely popular in Switzerland. People cook it at home from scratch or from a dried soup packet, and this soup is also one of the most loved, filling and satisfying lunches in restaurants up in the Alps while skiing in winter or hiking in summer.

This soup isn’t difficult to prepare but does need a long time on the stove to bring out the flavours, but it’s so worth it. It’s one of my favavourite soups and it doesn’t need more than a slice of freshly baked bread for a satisfying dinner on a cold evening.

The main star of the soup is pearl barley. There are two types of barley, as thekitchn.com explains: Hulled barley has had the tough, inedible outermost hull removed but still retains its bran and endosperm layer. It is the most nutritious of the two and can be considered a whole grain. A light golden brown in color, it’s the nuttier and chewier version as well. Pearl barley has been polished to remove the bran and possibly even the endosperm layers, resulting in a pale, creamy-colored grain. It is less chewy and cooks faster than the hulled variety, but has less fiber, is less nutritious, and is not considered a whole grain. 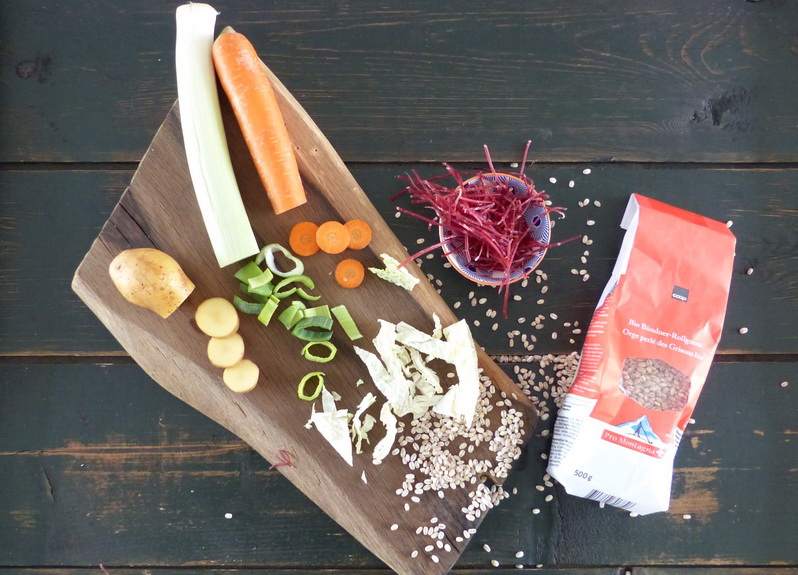 Wash and chop all vegetables in small cubes (potatoes, carrots, celery) or slices (leek, cabbage). Gently fry all vegetables except the leek in the oil. Add the leek, barley, stock powder and 2.5l water. Cook for 2 hours.

Then add the cold meat (in thin slices) and gently cook for another 10 minutes. Add salt and pepper to taste and the cream and serve with freshly baked bread.