Global food waste has been a large concern for me for quite some time, which is why I’m going to publish a series of food waste posts this year. Most people feel bad about throwing away food and would like to reduce their food waste but somehow don’t manage. Not throwing away food requires determination and time for planning, and I think what really helps to become more determined is knowing what the actual problem of food waste is. When we were kids, our parents would tell us about the ethical issue of throwing away food while people in far-away countries are hungry. This is very true but the impossible logistics of sending perishable goods to faraway places meant that I never fully bought into the argument. There are many other issues though that really made me change my mind. Also, food waste has become a stunningly huge problem with 33%-50% of the globally produced food being thrown away. Here is a list of some issues of food waste which might make you more determined to avoid it too. 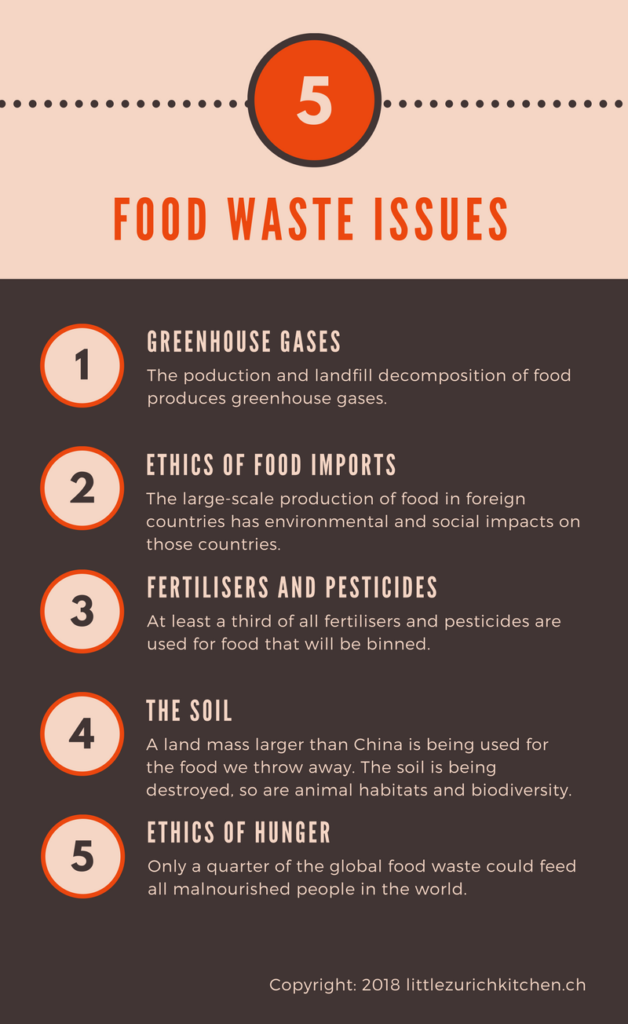 One. The greenhouse gases

Global meat production results in more greenhouse gases than the emissions of all the cars of the world. If we, then, don’t even eat that meat, all those harmful greenhouse gases were for nothing. Also, the food waste that goes to landfill decomposes without access to oxygen. This creates methane, a gas over twenty times more deadly than carbon dioxide. Eliminating food waste would be a significant step towards the reduction of global warming.

Two. The ethics of food imports

Food production has become a global affair. When we in the West import food from other countries, it can have a negative effect on the people and environment of those countries, especially if the imported food becomes a trend and therefore in huge demand. The avocado trend in the West has resulted in the empowerment of Mexico’s mafia, large scale deforestation and increased illnesses of the locals due to the surge in fertilizers and pesticides. There are very similar issues with the pineapple industry in Costa Rica. The global quinoa trend has lead to a quinoa price surge which means that the Bolivians, who relied on quinoa as a staple, can’t afford it anymore. The European imports of cucumbers, peppers and courgettes from Spain in winter means that large land masses in Spain are slowly turning into desert due to the immense water requirements. Once an area is desertificated, there’s no way back anymore. These are huge issues and up to 50% of it could be prevented if we only produced as much food as we actually eat.

Three. The fertilisers and pesticides

The food the world throws away is being grown on a land mass larger than China. On that land, natural habitats of animals are being removed, biodiversity has to make way for monocultures, the soil is being depleted through intense farming which can’t be repaired for many, many years, and lots and lots of valuable fresh water is being used for the food we never eat.

Five. The ethics of hunger

This argument has been around for decades and it’s still valid. With only a quarter of all food wasted in Europe and the US, all malnourished people in the world could be fed (source). This doesn’t only apply to people in developing countries, there are plenty of poor and hungry people in the US and Europe, yes even in Switzerland.

Keeping in mind these five issues of food waste has hugely helped me fight our own food waste at home. Maybe it can do the same for you? Next up in the food waste series: who wastes all the food?