Being member of a local vegetable cooperative means lots of fun and work in the fields, but it also means being forced to eat seasonal. The harvest share we receive every Friday is so big that we never buy any other vegetables. I absolutely love it though as our meals vary so much with the seasons and it forces me right now to cook with our good old Swiss winter vegetables instead of buying those imported courgettes, peppers and broccolis and cook the same as in summer.

We regularly get celery roots as they’re harvested in autumn and then stored over winter. I make a lot of soups with them or for example this celery root and apple salad, also known as Waldorf Salad as this salad has been served in New York’s Waldorf-Astoria hotel since 1896! While this recipe doesn’t have its origins in Switzerland, it has been a staple here for decades, so it does feel a bit Swiss. 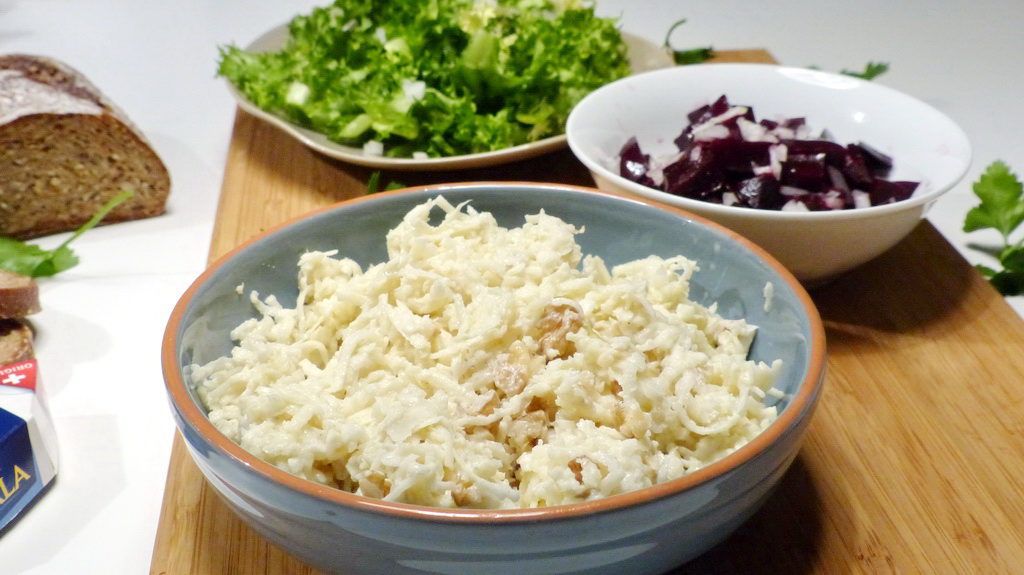 Prepare the dressing in a medium large bowl: mix the yoghurt, mustard and lemon juice.

Peel the celery root and grate it (it’s easiest with a kitchen machine but it works by hand too). Mix it with the dressing quickly so the celery doesn’t turn brown. Grate the apple and mix it in quickly too.

Chop the walnuts and add them the salad.

Season with salt and pepper.

Serve with other winter salads such as beetroot or winter lettuce.

One Reply to “Celery Root And Apple Salad”