When I was a child in the 1980ies, the majority of fruit and vegetables sold in the supermarkets/markets were the local, seasonal ones; the diet changed according to the seasons. These days, many vegetables and fruit are available all year round, if in season they’re grown in Switzerland, outside of the season they come from Southern Europe or even another continent. It’s becoming more and more difficult to actually know what’s in season unless you do your own research. Now that the supermarkets offer us such a variety of produce, it’s down to the consumer to decide how to shop, depending on many factors such as our own health, the impact on the environment and how the workers are being treated. I’m at a time in my life where I’m starting to question my shopping habits. I’m currently trying to find out more about the origin of the products I’m buying, in order to make more conscious decisions. While I refuse to buy Spanish strawberries and aspargus outside of the local seasons because I just don’t see the need for prolonged seasons, I do buy quite a few Spanish products if there’s no local alternative available, like peppers, courgettes and aubergines to name just a few. I wanted to know more about the Spanish fruit and vegetables I’m buying on a weekly basis and came to some shocking insights which will certainly influence my shopping habits from now on.

Almería, aka the plastic sea 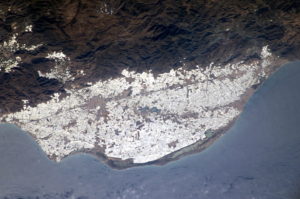 The Southern Spanish province Almería is mainly known for one thing: greenhouses. 1.3 million tons of vegetables and fruit are grown there per year, 70% of it is being exported to Northern Europe, including Switzerland. Tens of thousands of greenhouses across 450 square kilometres are located there, which makes it one of the most recognisable spots on the planet from the lens of a satellite. So far so good. At a closer look however, there are various serious issues with the so-called Europe’s winter garden.

One could think that Europe’s winter vegetables are being grown in a fertile part of the continent, but the opposite is the case; Almería is a barren and mountainous landscape. Growing a yearly 1.3 million tons of vegetables and fruit require a lot of water and this is slowly turning the province of Almería into a desert. The people of Almería will lose their homeland, and so will the animals – once a stretch of land has turned into a desert, there’s no way back. 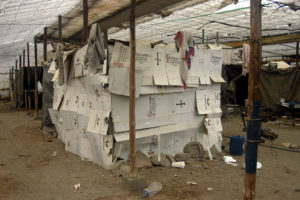 One could think that buying produce from an economically struggling Spain would give many locals some much needed work. However, the largest part of the workers – about 80’000 in total – are immigrants from Africa, not locals. It’s estimated that half of them are working in the greenhouses illegally. They’re Sans Papiers and don’t have the right to live in Spain or to have insurance or receive social benefits should they fall ill. The influx of new immigrants never ends, which means the greenhouse owners can lower the daily wages as they like – the ones who complain are out, and new workers are easily found. The minimum daily wage is set at EUR 45 for the area, but many illegal workers earn as little as EUR 30. They’re exposed to dangerous pesticides and fertilizers without being provided with the accurate clothing and masks on a daily basis. They work for hours without end with only 5 minute long toilet breaks in the 50 degrees Celsius hot greenhouses. Pregnant women are requested to carry baskets of heavy watermelons just like all the other women and men there. Most the workers can’t afford to live in a house, instead they live in the nearby slums, with makeshift huts made of old greenhouse plastic and pallets. Living in such a hut is unbearably hot in summer and freezing cold in the winter. There’s no running water or electricity. Due to their low salaries they can’t afford healthcare – instead many NGOs provide healthcare and dental care for free, since no one else is looking after them.

In the meantime I’ve received an answer from one of Switzerland’s largest supermarket chains, Coop (still awaiting the answer from Migros). Coop’s Spanish vegetables and fruit are being produced in Almeria. Apparently Coop and some others have introduced a certification (GRASP) which stands for sustainable production (both economically and socially). The first audit results have just come in and they’re working on improving things. It’s great that this is finally happening, but nevertheless there is still a lot of social inequality going on in Almeria, even if our small share of Coop products is being produced more sustainable (and I’m still questioning the reality, whether these standards can fully be implemented by the greenhouse owners, while the supermarkets constantly push prices down). And what’s more, no certification can help the fact that Almeria is being turned into a desert due to the greenhouses and their huge demand for water.

I was shocked to find out about the conditions of how Europe’s winter fruit and vegetables is being produced. I’m concerned about the environmental impact in Almería, but what’s even more sickening in my opinion is how the workers are being treated there. Even if there’s work in progress on improving the standards at least by Swiss supermarkets, I’m happy to adjust my own meals again to what’s in season and to wait until those courgettes and aubergines are available grown locally. Also, I’ll continue telling people about how these products are being grown and challenge the supermarkets. In a world full of choice and supermarket competition, it’s down to us consumers to do our own research and decide for what we stand for.

One Reply to “The Food We Eat: Europe’s Dirtly Little Secret”