The aspargus season is a much awaited and celebrated yearly event in Switzerland; the season is short and needs to be enjoyed to the fullest. Growing and harvesting aspargus is a time consuming activity which explains the high price tag, and this is another reason why aspargus is something that’s eaten as a treat, rather than just to fill up on one’s five a day’s (over the growing period of 12 months, 30 minutes of manual labour is being invested for each kilogram of aspargus). Fun fact: the aspargus season starts, depending on the weather, somewhere at the end of April and lasts until the 24th of June. The harvesting period is being kept short so the plants don’t get too exhausted and have at least 100 days to recover until the first frost. The date 24th of June stems from a Bauernregel (country lore) that says ‘Kirschen rot – Spargel tot‘ (cherries red, aspargus dead).

White and green aspargus are the same plant

The Swiss aspagus season lasts from April to June. Of course you can get them a lot earlier in the shops, but I make my family patiently wait for the Swiss and German ones, mainly due to environmental and ethical reasons. Aspargus from Mexico and Peru need to be flown in by air which creates a huge CO2 footprint (1kg of Swiss aspargus results in 0.3l of mineral oil, while 1kg of aspargus from the Americas results in about 3l of mineral oil, which is ten times more). What’s more, the mass production of aspargus in those countries often creates big issues for the land and farmers where the aspargus is grown (for example, often most of the water is directed to the big aspargus farms, and the small farmers can’t irrigate their own crops anymore which are supposed to feed the locals). We don’t buy the Spanish ones either, you can read my reasons here.

I’m not really into white aspargus but love the green ones, and here’s what we love to do with our green aspargus! 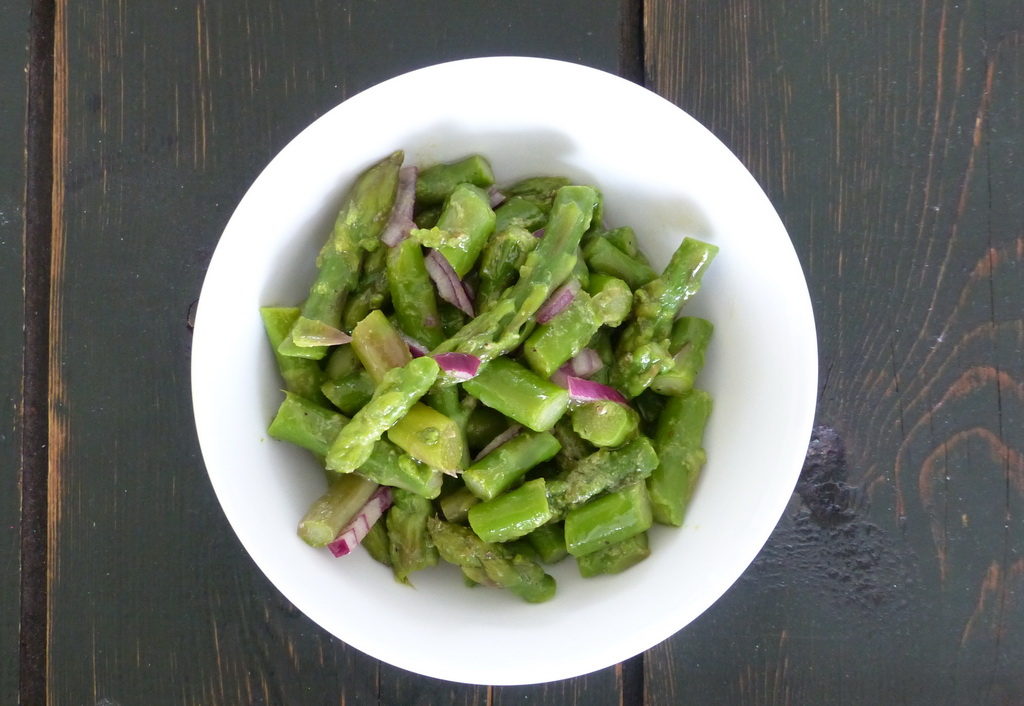 Green aspargus usually doesn’t need to be peeled. I just break off the lower end – if you break it off it breaks just about where the edible part starts.

Cut the aspargus into pieces of about 3cm (1 inch) and boil them in salt water until tender (5-15 minutes, depending on the thickness of the aspargus). Prepare a vinaigrette salad dressing with sunflower oil, white wine vinegar, salt, pepper and a little mustard. Add some chopped onions and the aspargus (see photo above).

Prepare a normal, plain risotto but add chopped up aspargus at the start of cooking. Here’s my saffron risotto recipe, just leave out the saffron and add a 1-2 cups of chopped aspargus instead.

This is one of my favourite salads to accompany a barbecue. It’s utterly delicious. Recipe from Green Kitchen Stories

This is the classic Swiss way of eating aspargus. Boil the entire aspargus, place them on a plate and pour over the sauce. There are many recipes for the egg yolk based sauce hollandaise, here’s one.

Spargelcremesuppe (aspargus and creme soup) is one of the only packet soups I like, and the one made from scratch with fresh aspargus is even more delicious. Here’s a recipe.

The Swiss make tarts with any vegetable or fruit available and aspargus is no exception. You can use my recipe for a mixed vegetable tart and swap the mixed vegetables with aspargus. Cut up the aspargus into 3cm (1 inch) long pieces and boil them in salt water for about five minutes. Then prepare and bake the tart as described.

5 Replies to “How To Make The Most Of Aspargus”