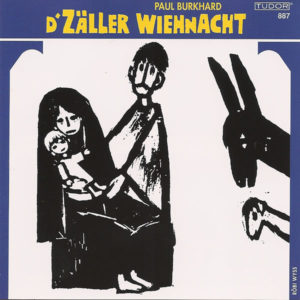 Christmas is around the corner and as a one-off I’m posting something non-food related. But – both the composer and the piece itself are such important parts of Swiss culture, which is why I thought I write about it this advent.

It all started in a small Swiss town called Zell

D’Zäller Wienacht (lit. Christmas at Zell) has had a very special place in the Christmas celebrations of the Swiss for decades. Like so many others, my family have always listened to it in the Christmas evenings when I was a child and I’m keen to continue this tradition with my children now. D’Zäller Wienacht is a Nativity play made up of eight songs in Zurich dialect. It was created by Swiss composer Paul Burkhard and was initially only intended for the Nativity play in Burkhard’s home village Zell near Winterthur in the year 1960. However, it got popular very quickly and has ever since been the best-known Nativity play in Switzerland and it’s still going strong, both as Nativity play in churches and schools as well as listening to the songs in people’s homes while sitting around the candle-lit Christmas tree. What’s mandatory for the Zäller Wienacht is that all of it – the singing, talking and acting – is being performed by children only. The most famous and most beautiful of the eight songs is ‘das isch de Stern vo Betlehem’ (this is the star of Betlehem). You can listen to it below. The Zäller Wienacht by Paul Burkhard is available in any Swiss music shop as CD, mp3 and other formats.

This post wouldn’t be complete without a mention of Paul Burkhard’s other work. The Swiss composer, who lived from 1911 to 1977, primarily wrote musicals, oratorios and operettas. His probably most famous song was ‘O mein Papa’ (oh! My Pa-Pa) written for the musical Der Schwarze Hecht in 1939. The song went around the world and was performed by numerous famous artists. His musicals Der Schwarze Hecht (lit. the black pike), an amusing story about the difficult relationships in extended families, and Die Kleine Niederdorfoper (lit. the small Niederdorf opera), a story of crime and love set in the Zurich neighbourhood Niederdorf, are important pieces of Swiss culture and still hugely popular. I went to watch Der Schwarze Hecht in the Zurich Bernhardtheater with my mum yesterday and it was absolutely brilliant. If you do understand Swiss German, go and watch these musicals either in a theatre or on TV, it’s well worth it and will add a great deal to your knowledge of Swiss culture.