I don’t know how you feel about the world right now, but I find the rising tensions between countries and religions quite unsettling and it makes me feel like the need of doing my own small bit to help people increase their tolerance for different cultures and religions. This is why I’ve started a new series with guest bloggers from all around the world writing about the use and importance of bread in their own culture. Bread is something that connects us all, and I thought it’d be a good one to show people that in the end, we’re all the same – humans with the same worries and joys. First up, my own contribution to the series about bread in Switzerland. I hope you’ll enjoy this series!

Fran, the creator of Little Zurich Kitchen, grew up in a small town in Switzerland in the 1980ies. Back then, Switzerland was not international at all, people mainly ate Swiss food and many foods such as avocados or sweet potatoes weren’t sold in the shops. People in Switzerland were also a lot more religions in the 1980ies than today, Fran used to attend catholic mass with her family each Sunday morning. As a child she did a lot of baking with her mum but the bread they mostly bought in their local bakery. Here’s how bread shaped Fran’s childhood in Switzerland and what significance bread has in Swiss culture.

In Switzerland, bread is being eaten throughout the day. Many Swiss start their day with a cup of coffee and a slice of bread with butter and jam or honey. A quick lunch at work often consists of a bread roll and some kind of mixed salad or a soup, or a sandwich. And when there’s not much time to prepare dinner, it’s not unusual to eat some slices of bread and things from the fridge such as cheese and cold cut meats. While many small shops have closed down in the past 20 or so years as more and more people buy all their food in the supermarkets, the bakeries have largely survived. I do love a good Swiss bakery. The smell of freshly baked bread when you come in, the shelf in the back of the counter stacked with different breads and bread rolls, and the sweet and savoury treats in the front. Due to time restrictions, nowadays most people buy their bread but bread making is still practised throughout the country by many, but mostly on special occasions like the weekend. We Swiss love our bread freshly baked in all variations; either brown or white, with a thick crunchy crust or soft, with seeds or not. My all-time favourite bread is the dunkle St. Galler Pfünder (a round 500g loaf of brown bread with a crunchy crust). A slice of this bread with some butter is Swiss heaven for me and the thing I always miss most when I’m abroad for longer periods.

My childhood memories around bread are plentiful. The earliest are wandering through the cobbled, car-free highstreet of our small town as a pre-schooler. To make the running of errands with my mum more interesting, she often bought me a Müsli (a mouse-shaped bread roll sprinkled with sugar and raisin eyes) in the local bakery. And then a few years later the sandwich 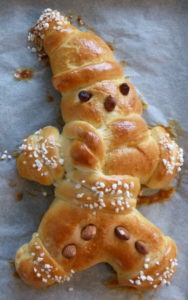 for morning snack in school my mum made me, which consisted oft two slices of bread with some butter and jam or cheese or ham. Back in the 1980ies most families ate a hot, freshly prepared lunch at home and a simple dinner, often consisting of things from the fridge and bread, and so did my family too. If we didn’t eat reheated pasta or Gschwellti (boiled potatoes) or Rösti (hash browns) for dinner, it was mostly slices of bread with cheese and ham or other cold cuts. We always had a loaf of bread in the food cupboard, either a brown or white one, but always with a thick, crunchy crust. On cold winter afternoons, we would often prepare a mug of hot Ovomaltine and dip a buttered slice of bread into it. There was a lot of bread baking in my family too, either we baked a Zopf bread for Sunday breakfast, Advent bread men or Gritibänz for Santa Claus day on December 6th or Zopf dough animals throughout the year. We didn’t bake brown bread very often though.

Bread is also often  involved in celebrations. In my Thurgau hometown the Examenswegge (end of school year bread) was a big thing. On the last day of the school year, every child in primary school received a fairly large loaf of soft, sweetened bread to celebrate the achievements of the academic year. I still remember it vividly, the pride of having completed another school year and the happy anticipation of the long summer holidays that was associated with the smell and taste of this bread loaf. The Examenswegge has a lot of similarities with the smaller 1. Augustwegge (first of August bread), a bread roll that is sold for the Swiss National Day on the first of August. In December, the Advent bread men are home-baked or sold everywhere, and not long after Christmas, on Epiphany day on January 6th, it’s the time when the Swiss head to the bakery early morning (or the day before) to buy their Dreikönigskuchen (Epiphany bread), a sweet bread with or without raisins consisting of 6-8 single bread rolls. Only one of the rolls has a toy king hidden inside; the person in the family who gets the king can rule over the rest of the family for the entire day and gets to wear a golden paper crown. There are bread related proverbs in Swiss German too. For example ‘De Foifer und s Weggli ha’ (to have the five franc coin and the bread roll) meaning to have both the coin that buys the bread roll and the bread roll at the same time. Which means ‘to have it all’ – we use this expression if someone is extremely lucky. You can find more food related Swiss German sayings here.

We Swiss love our bread, eat a lot of it all day long and it’s often the one food Swiss people miss most when abroad.