The World Bread Series is an initiative by Little Zurich Kitchen to give food writers from around the globe a platform to write about the use of and traditions around bread in the country they grew up in. In times of rising global tensions, we would like to use the universally loved bread to highlight how we humans share so much more than differentiates us. No matter what religion, race, skin colour, language or culture – we all dearly love our bread, and furthermore we all share the same hopes and fears about life in general.

Today, Nisha from the Magic Saucepan explains how bread is eaten across the vast country of India. Nisha grew up in South India and currently lives in Germany. Nisha’s blog contains an amazing range of Indian recipes and beautiful food photos. Thank you Nisha for taking part in the World Bread Series!

The bread culture in India is very different from the rest of the world. Most of the Indian regions do not have bread appertained to their meal system. This is mainly due to the varied climatic conditions across the nation, which helps in the produce yield. The North and the West India have abundance supply of wheat whereas in the East and the South rice is adequate. Thus, shaping the food-habits of the people. The majority of the bread that we have in India is the unleavened flat variety. Each region has its array of bread spreads pertaining to the availability of crops in their land ranging from wheat, maize and all kinds of millets.

I grew up in the South where the famous Indian flatbreads like Roti/Naan/Kulcha were considered a treat, as it was hardly prepared at home. The south Indians are conservative when it comes to home-cooked meals. We stick to the familiar family recipes and moreover back in the 90’s, Google was out of reach for many. Unless you have a north Indian neighbour/friend, it was hard to get those recipes. So, we used to indulge in these things when we go out and dine at the restaurants. The table will be filled with variety of breadbaskets and we gorged until our dress buttons popped. 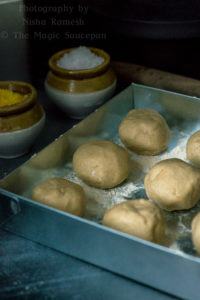 Having said that the southern region has few varieties of flatbread that we enjoy occasionally. Poori, fried flat bread is mostly prepared for a weekend brunch. Traditionally paired with potato stew or chickpea gravy, it is filling and makes one hearty meal that must be relished leisurely. This is always my go-to Sunday breakfast as it makes you so full and indolent; which is how one should be on a weekend! Few cuisines in India also make stuffed sweet flatbreads for festive occasions. It has a good amount of jaggery and coconut filling. Parotta, similar to the Malaysisan Roti Cannai, is a layered flatbread, which is flaky, fluffy, and crispy. It is a popular layman’s food in the South.

Most of the popular Indian flatbreads stem from the northwest region of India. This is the land that churns the delicious Indian curries and is the breadbasket of the nation. A typical North Indian breakfast consists of Parathas (a veggie/meat stuffed roti) with a big dollop of butter on top and chai on the side. This is absolutely the best combination. Even though this practice is not common in several Indian cultures, incorporating Parathas in breakfast is becoming more and more common throughout India. Everyone loves it, no doubt. Also, everything is so readily available and easily accessible.

The traditional variety of flatbread from the Indian subcontinent is roti, derived from the Sanskrit word Rotika meaning bread. It is made with whole-wheat flour called atta. Atta, figuratively used as a “flour for baking” means dough in hindi. It is milled from the Indian hard wheat crop also known as durum wheat. Traditionally, atta is made by stone-grinding wheat producing fibre rich flour, which contains higher amounts of bran. This process also imparts a delicate aroma and taste to the bread. Since the hard variety of wheat has more gluten content, it helps in preparing more pliable elastic dough, which is essential to roll the dough thinly. The flatbreads are traditionally cooked using the Tandoor, an Indian style clay oven. There are different ways to prepare Indian flatbreads. Rotis are cooked on a flat griddle and some bread like Parathas, are shallow fried and the few other like Poori and Bhatura are deep-fried.

We Indians love to have these breads anytime of the day. While Parathas are preferred during breakfast, Naan/Kulcha /roti are had during lunch or dinner. These are accompanied with a healthy dose of vegetables and gravies and a cucumber salad on the side. You will also see a small plate of lemon, sliced onions and green chillies on the side. To complete the meal, you need butter. No matter when you eat, the flatbreads, except the deep-fried ones, are lavishly smeared with butter or ghee (clarified butter). That’s the way to eat them.

Pav, derived from the Portuguese word Pao (which means sweet bread), is yet another poular bread variety. It is commonly used in preparing many popular Indian “chaat” (street food) like Pav Bhaji, Misal Pav, Batata Vada. Indian streets are filled with small shops and carts and stalls vivaciously known as Chaat Centres or Chaat Corners. These eatery joints are the cool hangout places for the young Indians. It is the paradise on earth. I still vividly remember that all my free hours during college were spent on munching these goodies. Late night movies, gossips or small talk always included chaat. Good food; good friends; good times – what more one can ask for?

The bakeries in India also have a different set up. It is a combination of bakery and confectionery. More than breads, they display an array of biscuits, puff pastries and cakes alike. When I was growing up, all I knew were the two varieties of white loaf bread – a mildly sweet variety and the not so sweet sandwich bread. The former is used for preparing simple toast with jam and butter. Whereas the latter is for simple sandwiches or we make an Indian fusion dish called Bread Upma, which is generally made with leftover bread pieces. But the trend has changed drastically in the recent years. Many of us have started including all types of breads in our daily meal. Bakeries selling international bread varieties are popping up more and more. And, there are many who started trying these at home as well.

Traditionally not all parts of India have bread as their staple food. While the urban Indians have grown to love them, many still stick to their customary meals.