If there’s a cookbook that most Swiss born after 1970 know from their youth, it’s Tiptopf. Thousands of Swiss have acquired their basic cooking skills with this cookbook, most of them during their teenage school cooking lessons. This cookbook was developed for the Swiss Hauswirtschaftsunterricht (home economics), with its first edition issued in 1986. In 2011 the 22nd edition was published. Tiptopf is the most sold schoolbook in Switzerland, available in three languages (French title: Crocu’menus, Italian title: unknown). Both the recipes and the look of the book have changed quite a bit ever since I learned to cook with it in high school in the 1990ies; these days, besides the Swiss classics there are also modern recipes like Mexican wraps or kidney bean salad while a few older, now unpopular recipes are gone. While you can find most Swiss classics like Zopf bread, Knöpfli pasta or sweet and savoury tarts in this book, this isn’t primarily a cookbook about traditional Swiss cuisine, instead it covers what the Swiss eat these days which is a lot more varied and international than back in the 1980ies when the book was first issued. Being a schoolbook, the recipes are easy to follow and great for anyone not fully fluent in German or new to cooking. Also, it’s a schoolbook so it’s not only about recipes but also about a healthy diet and practical tips around cooking and food preparing. 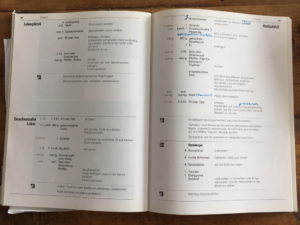 I don’t remember much of my own cooking lessons at school except that the boys mostly did silly things and I knew already how to cook most things we learned. My good old TipTopf (see photo) is completely falling apart these days as I still use it for pastry doughs, Knöpfli pasta, Zopf dough, pizza doughs, lasagne and other things. But it just can’t replace it with a new version, too many memories and childhood scribblings are in this book.

This book is a great book for those who