Once the month of January and its post-Christmas period of healthy eating is over, it’s time to prepare for the next stretch of sugary and fatty foods – the carnival season. The Swiss carnival is called Fasnacht in Swiss German, which originated from the word fasten (fasting).

While the costumes and traditions vary greatly across the country, most carnival foods are sugary and fatty. While we all still enjoy indulging in those treats, not many Swiss actually fast during Lent anymore these days, but I remember it well from my Swiss childhood in the 1980ies and its absence of chocolates and sweets.

With so many languages, regions and different traditions, it’d be impossible to list all Swiss Fasnacht specialities, but here’s a list of the most famous ones you can buy in most of Switzerland. 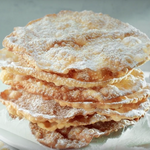 In the old days every family made their own Fasnachtschüechli (translated: little carnival cakes), which was a laborious process – the dough needed to be paper-thin before deep-frying, which was achieved by stretching it with the use of one’s bare knee and hands. My mum keeps telling me the story of how her younger brother fell into their mother’s laundry basket which was filled with finished Fasnachtschüechli, which was the work of many, many hours. Thin as they are, of course they all broke into thousands of pieces. Today, the delicous cakes – wafer-thin, deep-fried and sprinkled with lots of icing sugar – can be bought in any Swiss supermarket. But in my opinion by far the best ones are from Migros. Recipe for home-made here. Photo: Migusto.ch 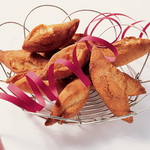 Little thighs (or legs) or Schenkeli is another deep-fried, sweet Fasnacht treat. It’s a sweet, plain dough with a hint of lemon zest that is deep-fried. It tastes a bit like a plain dougnut, but is much firmer in consistency. Some people think they taste a little dry; I do like them with a cup of strong English tea. During carnival time you can get them in any supermarket or even better in a bakery as they’re best eaten on the same day. Or, of course, you could make them yourself if you don’t mind deep-frying (German language recipe here). Photo: Swissmilk.ch 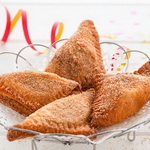 Deep-fried again, but this time with a filling. Ziger is a special kind of cheese which isn’t produced widely anymore these days, so this speciality is now usually produced with ricotta or quark. Zigerkrapfen are a perfect combination of a delicious, moist filling made of quark or ricotta, ground almonds, sugar, cinnamon, sultanas and lemon juice, wrapped in a sweet dough, and then deep-fried and sprinkled with cinnamon sugar. Very tasty. Here’s the Betty Bossi recipe. Photo: Betty Bossi

One Fasnacht treat which is a bit more unusual is the Bacheschnitte from Appenzell: the by now more or less stale Läckerli cookies from Christmas are covered in a batter containing milk, cinnamon and beer and then deep-fried to re-juvenate the stale cookies. I’ve never had it but I’m tempted to travel to Appenzell to try it or cook it myself.

The canton of Basel-Stadt, the place of one of the largest Fasnacht celebrations, offers as many Fasnacht foods. For example the Basler Fastenwähe (Basel fasting pie), a prezel-like bread, sprinkled with cumin seeds. The famous Basler Mehlsuppe (Basel flour soup) and the cheese or onion tarts are other famous Fasnacht treats which the Basel people love to eat in the morning after the Morgestraich, the famous and very colourful opening parade of the Basel Fasnacht on Monday, 4am.