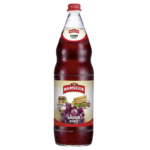 Once you see a drink called Sauser or Suuser in the shops and farmers markets, you know autumn is here. Sauser is a very young wine; the fermentation process of the grape juice has only just started when the liquid is being bottled already (after about one week of fermentation), which means this bubbly drink is slightly alcoholic. Sauser is made from red or white grapes. The ones available in supermarkets are pasteurised, meaning they can be kept for a few weeks but due to the pasteurisation also lack the certain something. Fresh, unpasteurised Sauser has to be consumed within a few days. 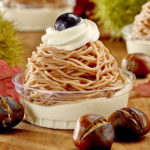 Vermicelles, a dessert made of chestnut purrée, whipped cream and sometimes a biscuit or merengue base, is a typical autumn dessert. You can buy ready-made ones in the supermarkets and bakeries – they all differ, so eat yourself through all the varieties and decide yourself which ones you like best! Or, you can also make Vermicelles easily yourself. Recipe following this autumn. Photo: Bäckerei Fleischli 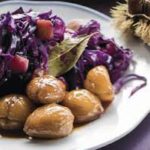 I’m not a big game fan but like in every other country, autumn is game season. Typical Swiss dishes prepared with game are Rehpfeffer and Hirschpfeffer. 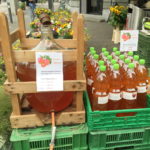 Not many things are more autumn-y than freshly pressed, unfiltered apple juice. You can find it in the supermarkets but even better, head to your local farmers market and buy it there. The important keywords are: frisch ab Presse (freshly pressed) and naturtrüb (unfiltered). Süessmoscht goes especially well together with Marroni (roasted chestnuts). 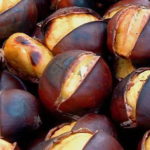 The smell of Marroni (roasted chestnuts) is as essential to Swiss autumn as the smell of the fallen leaves on the ground and the crisp air. Once Marroni stalls are taking over the place of the ice cream vendors in the towns, you know it’s the time to bring your clothes for colder weather down from the attic. Buying a bag of freshly roasted Marroni is a great way to warm up outside on a cold afternoon, but you can easily make them yourselves at home in the oven. The recipe follows as soon as the chestnuts are available to buy! Photo: SAC Bernina 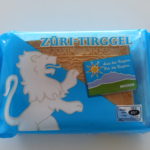 Tirggel, a specialty cookie from Zurich, is only being produced in the cold season, from autumn to spring, with demand peaks at Christmas and the Sechseläuten. For me Tirggel conjure up images of cold weather, oranges and freshly pressed apple juice. Tirggel are flat, crunchy and sweetened with honey. You can get them in Migros and Coop and some smaller shops. 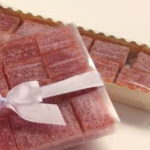 Autumn is quince season. My favourite thing to do with them is quince jelly, which we Swiss use as a jam. Quitten (quinces) can also be used to make Quittenpästli, a jelly like sweet made of quinces. This is a specialty from the Canton of Zurich but well known all over Switzerland. The oldest known recipe originates from the 16th century. Photo: Slowfood.ch 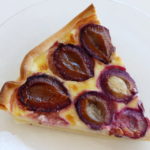 And of course, autumn is the time of many other seasonal fruit and vegetables. It’s the only time of the year my favourite apples, the Gravensteiner and Boskoop, are being sold. Having grown up in the canton of Thurgau, a place also known as Mostindien (the India of apple juice), I have to mention the Thurgauer Apfelkuchen, our famous apple cake. Zwetschgen, a special variety of plums, are in season too, they’re great for plum pie, stewed plums and plum sauce. Mushrooms are in season too – a firm Swiss favourite are the Eierschwämmli (chanterelles) – and so are pumpkins.

7 Replies to “9 Swiss autumn specialties you need to try”