It’s April and the rhubarb season has begun – an indicator that spring (I mean the real spring, not the sunny-cold-windy-rainy April early spring) is around the corner. Traditionally, we Swiss use rhubarb mostly for sweet recipes such as rhubarb tart or rhubarb compote. Like all Swiss, we bake a lot of tarts, and the beautiful rhubarb from my local, beautiful Oerlikon Market just seemed perfect for it.

Tarts are a national dish in Switzerland. We often eat them as a main meal, even the fruity versions. Many people, especially the older generation and we in our childhood, eat/used to eat them on Friday which is traditionally the meat free day in Switzerland. In my family we used to eat them for dinner, often accompanied by a salad. My husband’s family used to eat it for lunch – they ran a Zurich butchery and his grandmother used to bake tarts for the entire butchery staff on Fridays. For the fruity versions, besides rhubarb other popular fruit are: apples (grated or sliced), cherries, apricots, Zwetschgen (a kind of plum) or raspberries – you can either use fresh fruit or frozen fruit straight out of the freezer; I don’t recommend using defrosted fruit as the fruit loses its shape and it gets too juicy, but if they are used straight out of the freezer it works perfectly. As for savoury tarts, popular ones would be cheese, onion and bacon, spinach, leek, tomato or broccoli.

And the dough – you can either make your own dough which doesn’t take much time at all and is a lot tastier than the shop-bought one, or you just buy a dough from the shop, ideally the flattened one for a super quick, mess free tart preparation – I often have a packet of frozen fruit in the freezer and a shop-bought dough in the fridge. With this setup it takes me about 7 minutes to make a tart and put it into the oven.

I think the amount of regional names for the word tart shows how popular they are in Switzerland. In High German tart is called Wähe. In Basel and Zurich, hence close to the German border, we call it Wäje or Waje. Around Bern/Fribourg they call it Chueche, which in Zurich we would call a cake. Around Appenzell/St. Gallen it’s called Flade, which again in my Zurich dialect only exists as Chue-Flade, alas a cow poo. In Thurgau and Schaffhausen they call it Tünne (which for me is a very strange word, supposedly it comes from dünn (thin) as a Swiss tart is rather thin), in Graubünden Turte, which I in Zurich woud call a fancy round cake with icing and things (Torte). Last but not least, the Swiss French call it gâteau, the Swiss Italians torta or crostata, the Rumansch tuorta. Phew! 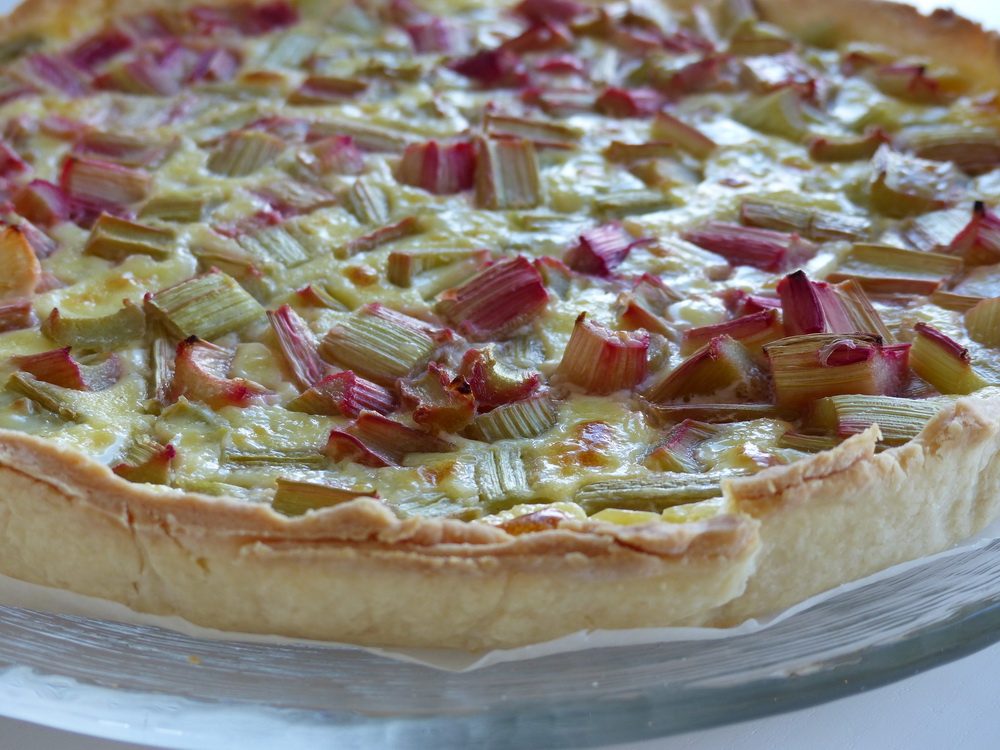 Recipe for rhubarb tart (or any other fruit tart)

Either use a shop bought Kuchenteig (tart dough), ideally the 32cm flattened, round one, or prepare your own dough, recipe here.

Put a baking parchment onto a round tart tin of 32cm diameter. Put flattened dough onto the parchment. Using a fork, make holes into the dough (this helps for a beautifully crunchy crust).

Spread the semolina or grated nuts evenly onto the dough – this layer is very important as it soaks up the surplus fruit juice while baking. If you don’t put any semolina or nuts underneath the fruit, you’ll end up with a very soggy tart.

Place rhubarb on top. Only for rhubarb, because it’s a very sour fruit: spread 3 tbsp of sugar over the fruit (I wouldn’t do this for any other fruit).

In a bowl, mix the milk, cream, egg, cornstarch and sugar together. Pour mixture over the fruit.

Take out of the oven, let it cool down a little and serve it like this if it’s for a main meal, or if you’re eating it as a dessert you could also add a dollop of whipped cream to make it a bit more indulgent.