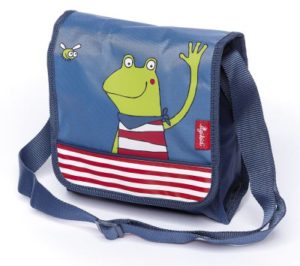 Every child is requested to bring their snack in either a Znünitäschli, also called Kindergartentasche, which is small cross-shoulder bag, or in a small backpack. When I was small, everyone brought a cross-shoulder bag but these days probably about two thirds still have that bag, while the other third brings their snack in a backpack. They do need a backpack for their forest mornings. My kids just have a backpack for everything. 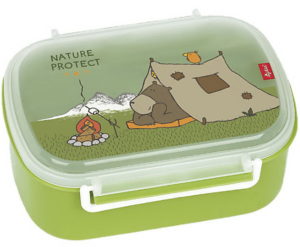 Most kindergartens request the kids to bring their snacks in a Znünibox (snack box). Some common ones available in Switzerland are: Sigikid Brotdose (cheap and lightweight but breaks easily if it falls on the floor). Yumbox Mini (very sturdy but also quite heavy and more expensive). Ikea, Migros and Coop have their own boxes too.

Some towns are stricter and some are less strict as to what types of food the kids can bring for snacktime. In most kindergartens, sugary foods such as cakes, cookies and chocolate are not allowed tough. What’s more, some towns, like the city of Zurich, prefer if the kids only sporadically bring white bread or a banana for snack. White bread isn’t very nutricious and for the banana, one reason is that the sugar of the bananas stick to the teeth more than it’s the case with other fruits, but also because Zurich prefers local, seasonal produce instead of exotic ones for environmental reasons.

Personally, I want to raise my kids with some awareness for seasons and environmental issues, so I only give them fruit and vegetables for snack that are in season in Switzerland. Also, I always try to provide a snack that contains of fruit/vegetables, some carbs and some proteins, a mix of nutrients that keeps the energy high until lunchtime.