In times of the Lädelisterben (the closing down of the small shops due to the big supermarkets), businesses like HelvetiBox are adding some much needed regionality and exposure of small producers to Switzerland’s culinary landscape.

HelvetiBox is a monthly food box delivered to your door that lets you taste specialities of one canton per month. The box is the brainchild of Florian Corthésy; he lives in Fribourg and works in Zurich and therefore crosses the Röstigraben (lit. ‘hash brown ditch’, which describes the border between French and German speaking Switzerland) on a daily basis. Going back and forth between these two parts of Switzerland made him realise that the Swiss largely stick to their own linguistic region for their food and that there’s a lot of potential for bringing the products of other Swiss regions closer to people. Geographically speaking, Switzerland is a tiny place, but it’s so densely populated and each of the 26 cantons has such distinctive regional products. 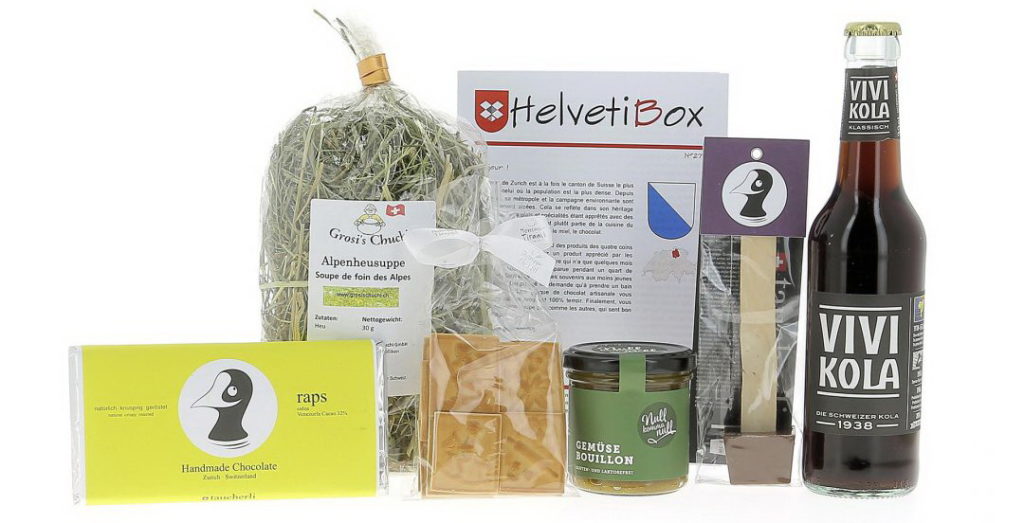 HelvetiBox provides an insight into the tastes of Switzerland, organised by cantons and balanced between tradition and innovation. Furthermore, the products adapt to the seasons. Each box contains 5-8 items and you can either purchase just one box or get a subscription for 2, 3, 6, 9 or 12 months respectively. Prices start at CHF 55 per month. The boxes make a great present too for any food lover.

HelvetiBox is giving away one December box to one of our readers based in Switzerland – the canton is Schaffhausen (see box here). If you’d like to win this box, send an email with the subject ‘HelvetiBox’ to hello at littlezurichkitchen.ch until December 24th. The winner will be contacted by email. There’s no catch – we won’t keep your email address.

HelvetiBox is also offering a special discount of 10.- for subscriptions from 3 months and up, valid until February 14th 2018. The discount code is littlezurichkitchen, use the code at checkout.