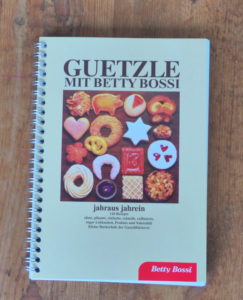 One of the most popular of the more than 100 Betty Bossi cookbooks is the one called Guetzle mit Betty Bossi (cookie making with Betty Bossi), a book filled with cookie recipes from Switzerland and abroad. You can find most of the classic Swiss Christmas cookies in this book and many other Swiss classics that are baked in Switzerland all throughout the year. The Guezle mit Betty Bossi book was first published in 1978 and brought some in Switzerland still unknown cookies like Brownies, Florentines or Vanillekipferl their fame. The hugely popular book was out of stock from 1993 until 2016 and was instead replaced by the book Das neue Guezlibuech (the new cookie book), which is good but just not like the original first one. Last year, to the delight of many people, the initial Guetzle mit Betty Bossi was back in print. This book is one of my cooking bibles, I use it for all my Christmas cookies; on this blog you can find a few of the Betty Bossi Christmas cookies recipes. There’s also many other cookie recipes I’m using throughout the year, for example the Wasserbretzeli and Lace Cookies.

This book, containing 118 recipes, is the original version from back in the 1970ies. It still contains the photos from back then, so don’t expect modern, bright food photos but the brownish, dark photographs from the 1970ies. The recipes though are still as popular as back in the seventies, and who can resist a good Swiss Guezli?