Living in a country bordering France means we Swiss have incorporated many French things into our lives. Swiss German contains a lot of French words (for example Trottoir instead of the High German Gehsteig for pavement, or Velo instead of Fahrrad for bike), and of course we’ve also adapted many delicious French meals and desserts. One of them is the Grand Marnier ice cream, which technically is a frozen parfait. This ice cream, made with whipped cream and whipped egg whites, is deliciously light and fluffy despite not being made in an ice cream machine or with any other lenghty procedure. I grew up with Grand Marnier ice cream, we always bought the little tubs from Migros (Glacetta Grand Marnier, available in any larger Migros), they remind me very much of my childhood. You can also make this delicious ice cream yourself, it makes for a great dessert when entertaining guests – especially if you don’t have a lot of time available for making your dessert.

Instead of Grand Marnier you can also flavour this frozen parfait with vanilla or cinnamon – you can even seperate the mixture into two halves just before the flavouring step and make two different flavours in case you have children or someone else who doesn’t want any alcohol in theirs. 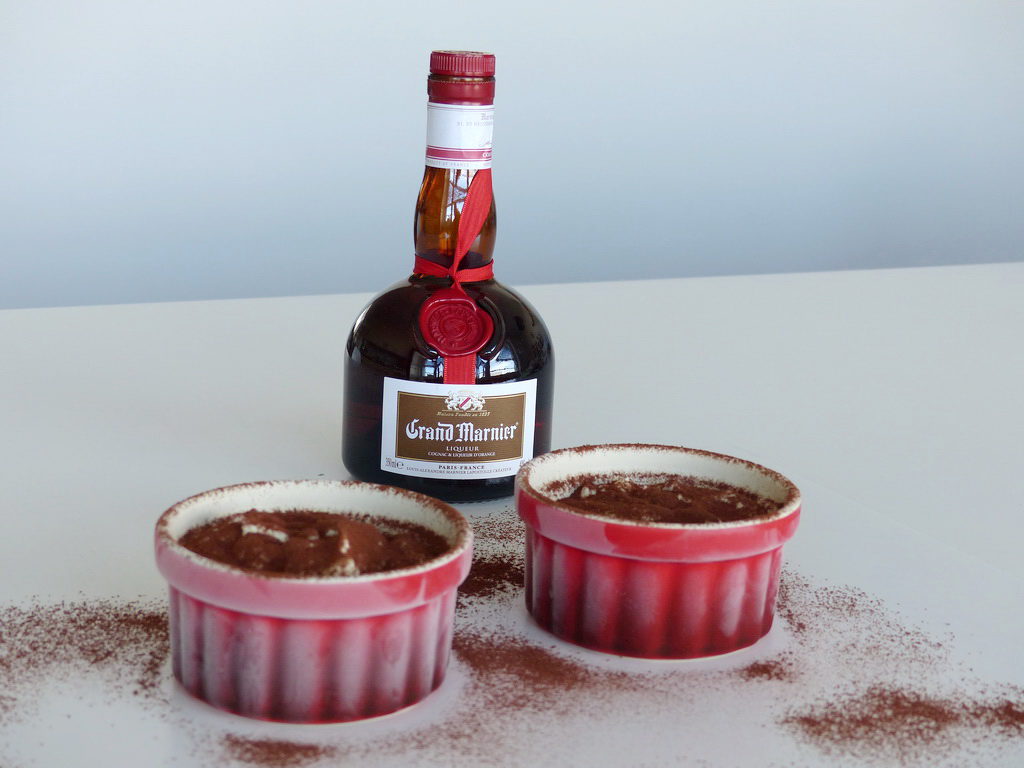 Beat 4 tbsps of sugar and the egg yolks until fluffy and white-ish in colour. Add 3 tbsps of Grand Marnier and mix well. If you like your desserts a little boozy, you can also add more Grand Marnier. If I make this ice cream just for me and my husband I use double the amount (6 tbsps).

Whip the cream and stir half of it into the egg sugar mixture. Add the other half of the whipped cream and using a spatula, carefully fold it into the mixture.

Whisk the egg whites together with the salt until stiff. Add the remaining 1 tbsp of sugar and whisk until the egg whites look shiny. Now carefully fold it into the ice cream mixture.

Spoon the mixture into small bowls straight away. Alternatively you can use one big container, for example a rectangular cake tin (25cm long, covered in cling film – in that case you’d cut the frozen parfait in slices for serving). Freeze in the freezer for 4 hours.

Before serving, sprinkle some cacao powder on the ice creams.

Vanilla flavour: replace the Grand Marnier with the seeds of 1 vanilla stick or 1 tsp of vanilla paste

Cinnamon flavour: same as vanilla version, plus 1 tsp of cinnamon