This delicious bread is as easy as it is quick to make. First of all the dough doesn’t need kneading, just a little stir. Also, there is no second rising necessary. And here are some baguette fun facts: the French word baguette simply means wand, stick or baton (as in baguette magique (magic wand), which makes the British English expression for baguette, French stick, a lot less weird). It is said that the baguette was invented because in the year 1920 a new law in France stated that bakers aren’t allowed to start their work before 4am. This meant that there wasn’t enough time anymore to bake the traditional round loaves, which is why they started baking the much quicker baguettes.

An important note: these breads are at their most delicious on the day of baking! 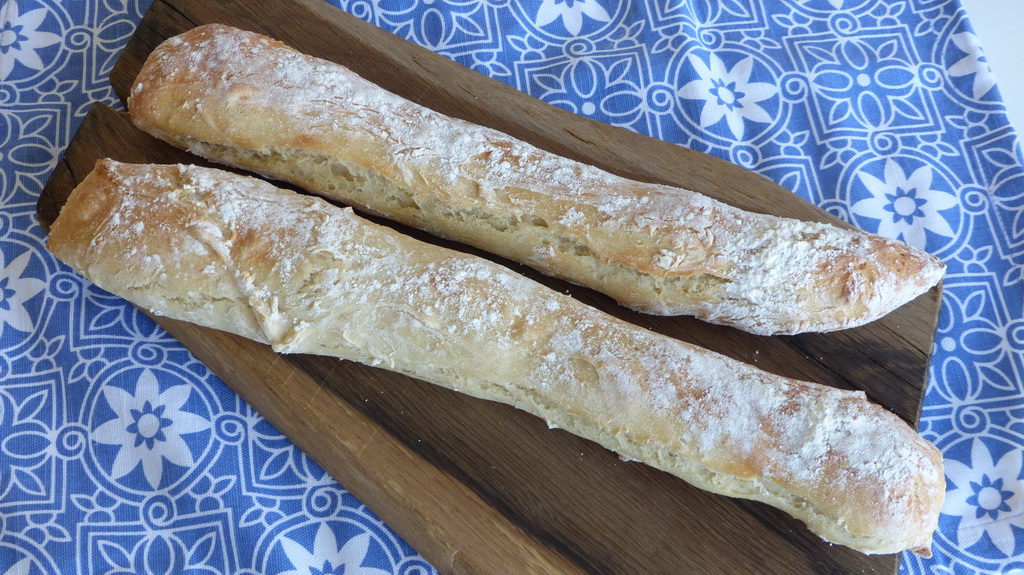 In a large bowl, mix the yeast and sugar with 3dl (10 fl oz) lukewarm water. Stir the mixture until the yeast is fully dissolved.

Add the flour and salt and stir with a spoon until everything is fully mixed and resembling a dough.

Cover the bowl with clingfilm and let it rest at room temperature for two hours.

Then sprinkle plenty of flour onto a clean surface and carefully shake the dough onto the surface – carefully as you don’t want to lose the air bubbles! Sprinkle with flour.

Carefully cut the dough into two or three parts (again, you don’t want to squeeze out all the air bubbles as there is no second rising with this recipe). Carefully stretch each piece of dough until they resemble baguette breads. Place them onto a baking tray covered in baking parchment.

Heat your oven to 240 C (464 F). Place a fireproof dish with plenty of water into the oven for baking – the added moisture will make your bread beautifully crisp. Bake the breads for 20-25 minutes. You know that the breads are fully baked when you knock the bottom of the breads with your knuckle and it sounds hollow.