Birnendicksaft, in Switzerland also known as Birnel or Birnenhonig and in North America called pear butter, is a 100% natural product made of pears.

It has a similar consistency to honey, but with a slightly sour note which goes really well with certain dishes such as pancakes. It’s also commonly used as a bread spread or for sweetening teas, stewed fruit or müesli and for making Luzerner Lebkuchen (Lucern gingerbread). During World War II when coffee was rationed, many a Swiss drank milk mixed with Birnendicksaft as a coffee substitute (and some kids still do it instead of honey milk). In central Switzerland, where Birnendicksaft is especially popular, it is also eaten together with Gschwellti (boiled potatoes) or Ziger (whey cheese) – both of which don’t go down well with me. I don’t like sweet spreads with my boiled potatoes (but I know that some people like my late grandfather-in-law also eat them with butter and jam) and Ziger is something beyond my tolerance; I find it an utterly bizarre smell and taste.

Back to Birnendicksaft which I do like a lot – it’s a 100% natural product, made from untreated pears. Being a natural product, it’s not only good for you but also for our wildlife; the pears that are being used are exclusively grown on standard (i.e. long-stemmed) pear trees. While these standard pear and apple trees are so important for many endangered birds (and also they are an iconic part of the Swiss landscape), they are replaced more and more by small trees which are more profitable in modern farming. If you want to learn more about how to support standard fruit trees and help your endangered local birds, visit the Hochstamm Suisse website or buy apple and pear products with the Hochstamm Suisse label.

When I was a child, Birnendicksaft wasn’t sold by the supermarkets yet, instead you bought it straight from the farmer or traditionally also from your local women’s association. These days it’s available in all supermarkets, from some farmers and also from Winterhilfe, a great charity that supports the poor in Switzerland. 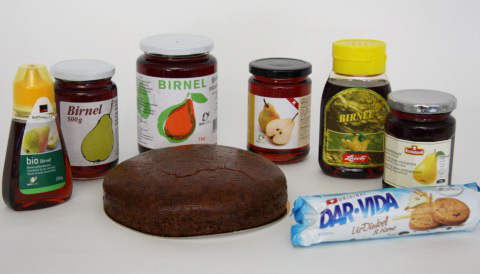