‘Alltagskoller’ is a new, innovative Swiss cookbook for people who don’t have much time to cook but nevertheless need to produce varied meals on a daily basis. The book offers a large selection of recipes; the recipe style, however, is different to most other cookbooks – they’re super-short and are written down Handgelenk mal Pi (lit. ‘wrist times Pi’, or by the rule of thumb as it’s called in English). This means the ingredients are listed without measurements, which is perfect for people who know how to cook as it makes the recipe reading and cooking very fast. The other special feature is that the reipces aren’t written in German but in Züritütsch (Zurich dialect). For most of you this means that you’d probably struggle to understand the recipes, but it makes the perfect present for any busy Swiss parent you’re friends with.

We’ve talked to the author Nicole about Swiss food and her Swiss childhood food memories. Nicole and I both grew up in the 1980ies and listening to her memories, it seems we both experienced a typical Swiss upbringing in terms of food.

Nicole, tell us something about you 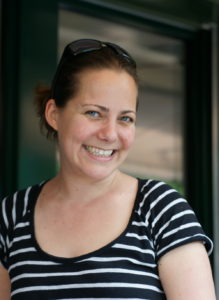 My name is Nicole Koller and I live in the Zürcher Oberland (Zurich highlands) with my husband and my two boys. We love spending time in the forest, at the nearby lake or with our campervan, near and far away. I’m in my forties, our boys will be starting school this summer and I also work part-time as a medical assistant.

Why did you have the idea for your cookbook?

The idea for my cookbook Alltagskoller came when I started the weekly grocery shopping for my family. Every week I was sitting in front of the empty shopping list, trying to figure out what to cook during the coming seven days. I just didn’t have enough ideas for a varied meal plan and then there are the unforeseen days when you just don’t have enough time to prepare a proper dinner. I started collecting meal ideas and soon the idea for a larger project was born.

How long did it take you to create your book from start to the end?

It took us one year. Many friends and neighbours ‘had’ to test eat with us, and our boys learned to be patient and wait with tucking in until the meal photo had been taken. The realisation of the cookbook was only possible with the help of my brother and his creative agency  res-design who turned my ideas, photos and writing into an actual book.

Where do you get your inspiration for your meals?

Many of the meals stem from my childhood, while others come from friends, relatives, various cookbooks, TV shows, the internet and some just happened.

Which regional specialties accompanied you through your childhood? 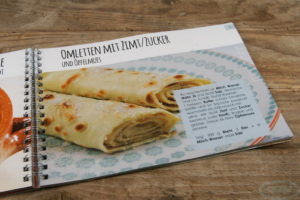 When I was a child, the farmer routinely drove his tractor through the Zurich highlands villages to sell his seasonal vegetables, fruit, bread, eggs and apple juice if it was apple season. We had a small garden, and no carrot tastes better than the one that had just been pulled out of the soil. Or a freshly cut rhubarb stalk, freed from the large leaves and the skin, dipped into a bowl of sugar and enjoyed making a ‘lemon face’. My granddad worked as a mushroom inspector and with him we roamed the forests for hours without end in the search for mushrooms. We usually ate them in the form of Gfüllti Pastetli mit Pilz-Rahm-Sauce (stuffed Swiss pasties with mushroom cream sauce) or breaded and deep-fried mushrooms. I’m trying to pass on these experiences to my own boys.

Which everyday meals did your own mum cook on a regular basis?

Her everyday cuisine was simple, down-to-eath and delicious. We always had to try everything, apart from the liver and tripe dishes. On the weekends or when we had guests, the meals were more elaborate or ‘es grosses Köch’ as we call it in Swiss German. This would mostly have been a roast with various trimmings. The most exotic dish in the 1980ies were Chinesische Nüdeli (Chinese Noodles). The legendary semolina pudding with freshly-pressed orange juice was what our mum prepared for us when we were ill.

When you were a child, did you eat warm or cold lunches and dinners?

In my childhood, we always had a freshly prepared, warm lunch which was always ready when we came home from school at noon. Dinner was mostly cold – the usuals were Gschwellti (boiled potatoes), Wienerli im Teig (sausages wrapped in puff pastry), Wähen (fruit or vegetable tarts), Birchermüesli, Wurst-Käse-Salat (sausage cheese salad), Schinkengipfeli (ham croissants) or Chäs-Chüechli (small cheese tarts) – meals that are featured in my cookbook too.

Who taught you to cook?

My mum taught me – we were allowed to cook and experiment ourselves from an early age. My favourite toy as a small child was my electric stove that actually worked! We also learned to cook in school when I was in my teenage years; I remember that we often cooked Riz Casimir (the Swiss 1980ies version of a chicken curry) and that we always had to strictly follow the recipes. I was often bored during the cooking lessons and wasn’t exactly the teacher’s favourite child.

What are your favourite Swiss dishes? 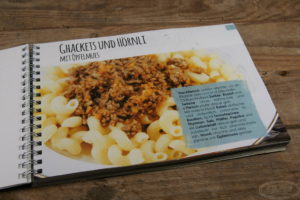 There are of course the Swiss classics like Züri-Gschnätzlets (diced veal Zurich style), Chäs-Fondü (cheese fondue), Ghackets und Hörnli (macaroni and mince) and Birchermüesli. But I’ve also fallen in love with Capuns and there’s nothing better than a Tessiner-Plättli with produce straight from the market. I like many Swiss dishes and enjoy cooking Schwiizer Chuchi (Swiss cuisine).

How, in your opinion, has Swiss cuisine changed since your childhood?

Sadly, many ‘old’ recipes have gotten forgotten or people are too nervous to cook an elaborate dish. However, I do realise how people enjoy a good old Swiss dish like a Suure Mocke or a gespickter Rindsbraten with Spätzli and Rotkraut (red cabbage) and how it makes them remember their own childhood.

What are your favourite products from Coop and Migros?

You’re now selling your cookbook. What are your next plans for the brand Alltagskoller?

Get the book here: 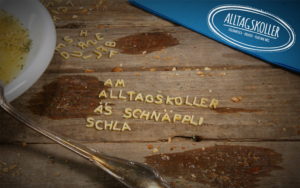