The month of February means several things in Switzerland. The national sirens testing on the first Wednesday in February at 1.30pm gives many a Swiss an uneasy feeling, the tax return letter that flies into people’s letterboxes in the same week adds to the uneasiness of many more. It’s also the time of the large and small carnival parades before Ash Wednesday, which marks the start of the fasting period of Lent. And, most importantly, it is also the time of the Sportferien (sport holidays, formerly known as Skiferien (ski holidays) back in the olden days), when the Swiss familes undertake a week or two in physical exercise up in the Alps. To avoid large queues at the ski lifts, the schools of each canton have a designated slot in January or February for this holiday. As a Thurgau child I was lucky as we only had to share the slopes with the families from the two Basel cantons, which meant no queues anywhere. With disdain we used to watch the convoy of ZH number-plated cars driving the roads up to the Alps when we traveled back to the lowlands as the Thurgau holidays were over. Because everybody knew, when the Zurich families hit the slopes, everything from skilifts to restaurants will be incredibly busy (and we all knew that the Zurichers are arrogant – one more reason to go back home before they arrive). Well, having married a Zurich boy, I’m now part of the busy Zurich holiday bubble and it doesn’t look like we’ll ever leave it.

Why the Swiss are so serious about ski holidays

I love the Swiss tradition of ski holidays so much. First of all it’s fun to spend time skiing, sledging, ice skating, swimming in thermal baths and going to bed early and super exhausted. But it’s about a lot more than just winter fun. Exercising in the oxygen deprived air of the Alps has some serious, positive impacts on one’s health. Up in the mountains the body needs to work a lot harder to get the oxygen needed for physical exercise which leaves you a lot stronger and more energetic when back in the lowlands – many professional athletes spend time in the Alps due to exactly this reason. Furthermore, winter sports are hard work so it’s like a mini bootcamp which adds to the feeling of being more energetic. And lastly, spending at least a week, or ideally two weeks, in an alpine climate helps tremendously for the health of people who struggle with recurring bronchial issues, asthma or allergies due to several factors such as temperature, wind, UV radiation and air pressure; there’s a reason why there are so many high-altitude health clinics! And I think late January/early February is just the perfect time for the ski holidays as it provides a much needed energy boost after the sluggish feeling of too much food at Christmas and not enough sun since late October.

The foods the Swiss connect with ski holidays

Depending on where in Switzerland people go skiing and depending on their food preferences, their food map will look different. But here’s a general idea what many people’s eating habits look like during a Swiss ski holiday.

Winter sports require a breakfast rich in protein and carbs; for the Swiss this would consist of fresh, crusty bread, cheese, some sliced meats such as Mostbröckli, Bündnerfleisch, ham and cold sliced sausagemeat such as Fleischkäse or Lyoner, joghurt, some kind of egg (boiled, fried, scrambled), jams, honey and of course Nutella. Breakfast is happening early, at 7.30 or 8am in order to be ready for getting on the gondola at the valley station at 9ish.

The Znüni (morning snack) would either be a croissant or a sweet pastry such as Nussgipfel (croissant filled with a sweet hazelnut paste) or a Mandelgipfel (almond croissant), a Biberli (honey gingerbread filled with almond paste), chocolates such as Kägi Fret or similar in one of the restaurants on the slopes, or just a quick cereal bar or apple on the chairlifts. And if it’s really cold and windy on the slopes, a hot Ovomaltine or hot chocolate is mandatory!

There is a lot of choice in most restaurants on the slopes, but the most popular meals are: Bündner Gerstensuppe if you’re skiing in the canton of Graubünden, which is a rich, delicious barley soup, Älplermagronen (alpine farmer’s maccaroni) which is a bit like mac and cheese but with with less cheese, more cream and added potatoes and browned onions, Schnipo which means Schnitzel-Pomfrit, which is a breaded pork or veal escalope with french fries, or Bratwurst (a fine, fried pork sausage) with fries and brown onion sauce, or if you’re a lover of desserts, there is the good news that apple strudel with vanilla sauce officially counts as lunch on the slopes. Sweetened coffee with schnapps liquor and whipped cream, called Schümli Pflümli or Kafi Lutz are popular after-lunch drinks. 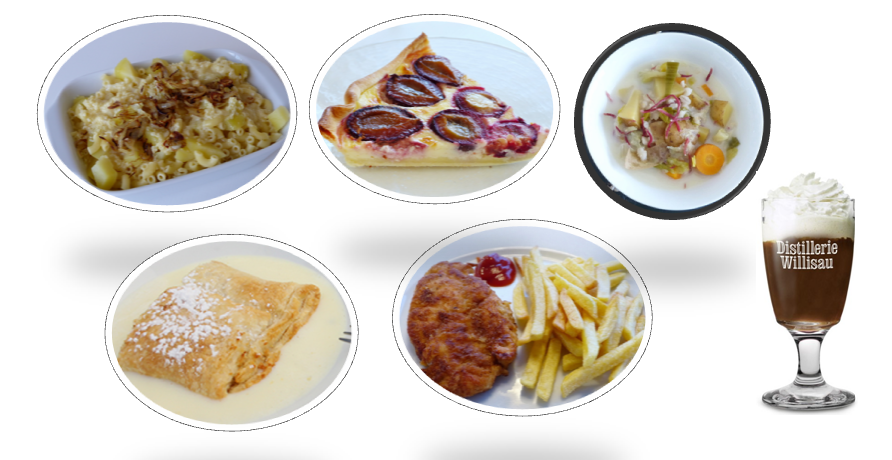 Après-Ski, French for after skiing, means having a drink after skiing. Mostly this is being done still wearing all ski gear, either in a bar just at the end of the slopes, or somewhere in the village. These drinks, which can range from beer or wine to hot chocolate or a hot punsch and any drink containing some sort of schnapps liquor, don’t really involve any serious food apart from the odd chips. The chips would most certainly be from the Zweifel brand though, Switzerland’s most popular potato chips brand.

For a restaurant dinner in a Swiss alpine village, the typical ski holidays option would be pizza at a Pizzeria. Many Italians workers were involved in building Switzerland’s alpine train infrastructure (mainly tunnels) during the 19th and 20th century – up to 80% of all workers would be Italians at times – and they brought their pizza restaurants with them. You can find at least one Pizzeria in any ski resort. However, skiing and the ski slope restaurant lunches are not cheap in Switzerland to put it mildly, so most people cook their own dinner in their holiday flat or eat at their hotel. After a day on the slopes, the evenings are usually spent relatively quietly at home with board games, a book or a movie, followed by an early night, because the mountains will be calling again early next morning!

More info about skiing in Switzerland 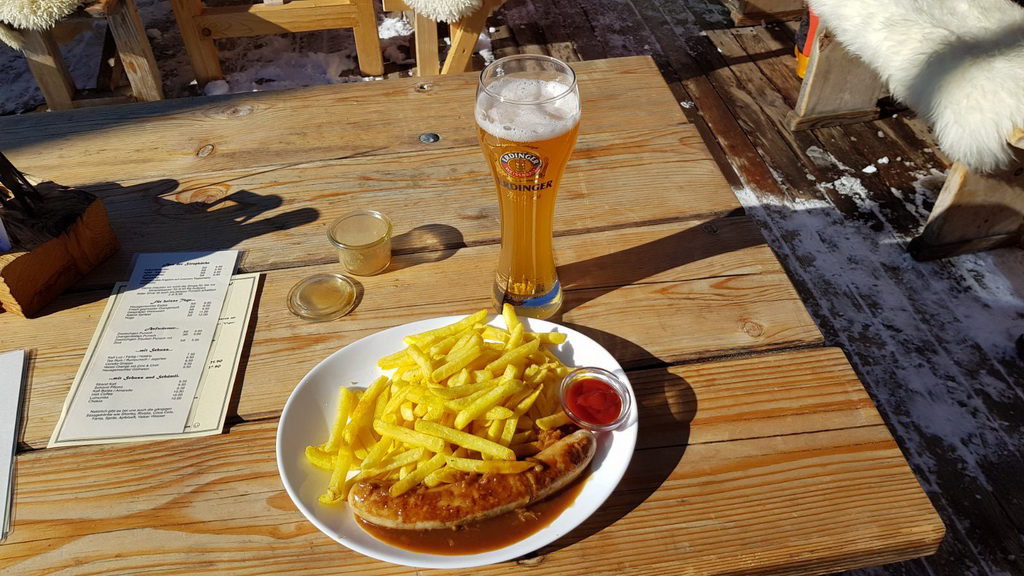 One Reply to “A Swiss Ski Holidays Food Map”